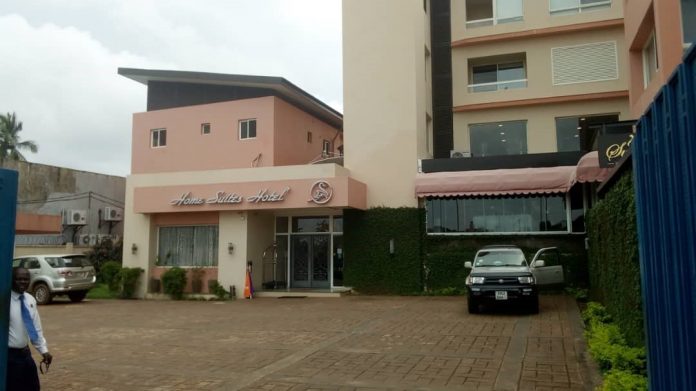 Insinuations made that the Home Suite Hotel,which is located at the Aberdeen round-about is posing serious health risks to residents within that community further creating the impression that the business entity’s sewage waste is uncontrollably flowing along nearby streets is totally mischievous ,unfortunate and very misleading.

During sustained and thorough investigations mounted by this medium over a period of timeit was proven beyond all reasonable doubts that the situation is otherwise as it came out glaringly that the flow of the said waste is not in any way coming from or caused by Home Suite Hotel as some are attempting the public to believe. As a matter of fact it is a calculated move on the part of some to tarnish the good image of a business entity that believes in upholding sound sanitary conditions and co-exists decently without any objective of inconveniencing its neighbours.

The current and real situation at the scene is this : there is a supermarket just close to the hotel which is allegedly oozing out the sewage waste which goes under the fence of the hotel from where it is spilling out on the streets creating a very nauseating and pungent smell in that environment. According to an official of the Management of the hotel when this problem emerged they drew the attention of the Freetown City Council but the latter responded that they will contact the Sierra Leone Road Authority but lamented that no action was taken by the two institutions to rectify the situation. He emphasized that as a business entity they do not have that power to dig any street or road as it does not fall within their purview. The official disclosed that they decided to fund the digging of a passage, with the assistance of the military,that runs underneath via the Aberdeen Police Station to the sea. “Already the area that was dug has been tarred,” he also revealed.  The good news is that construction work on the drainage is currently completed and the residents in the locality are very cooperative in that regard.

“We are really impressed with the move so far made by the Management of the Hotel to facilitate the construction of the drainage although some of us are very mindful of where the sewage waste is coming from. As far as we have resolved we will give our meaningful inputs to ensure that the problem is solved once and for all,” Musa Stronge, one of the youth activists intimated this medium during one of the fact-finding investigation adding that they are calling on the attention of the Government to intervene as there is the likelihood that the sewage waste could affect other localities.

“One cannot really fathom how a business entity such as Home Suite Hotel, which is competing with other hotels in that part of the country can complacently sit by and pamper an ugly thing like this to happen when in actual fact it is trying its best to attract customers,” the Hotel official logically argued adding that it is possible for such a thing to happen based on intermittentdislocations or technical hitches but they will not turn a blind eye to it. He, however, regretted that instead of trying to really find out where the problem lie some are peddling the negative information that the sewage waste is coming from Home Suite Hotel.

Still trying to hammer home his point he rhetorically asked: “Does it make sense for us to see the sewage waste gathering at our fence with our customers and even ourselves feeling uncomfortable with the offensive smell?”

He said the problem is one that could be caused by clogged or corroded pipes but said that it could be surmounted further underscoring how they are willing and ready to work collaboratively with all the stakeholders in order to timely construct the drainage and ensure that the sewage waste has a proper channel that it could go through for it to be disposed safely.