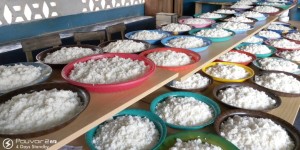 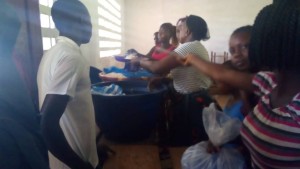 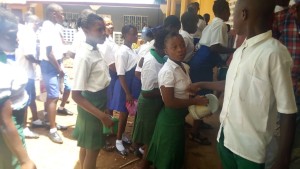 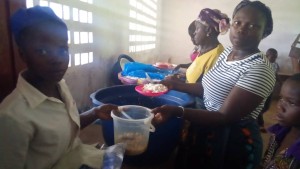 The event on Thursday 1st August 2019 targeted the major examination centers and featured one thousand pupils in Kailahun and five hundred in Port Loko plus teachers, parents and other beneficiaries from the Holy Ghost, Wesley, Ahmadiyya and Njaluahun Secondary Schools in Segbwema Kailahun District and the Schelenker Secondary School in Port Loko.

From his home in the Greenwich, London, United Kingdom, Hon. Faley explained in a telephone interview that the thrust of his intervention is borne out humanitarian and not political intention.

“The purpose of my gesture is to support the education of the poor and deprived Basic Education students regardless of their tribes, religion, political party affiliation or region,” Hon. Robin said, noting that, “I strongly believe that our young brothers and sisters require so much attention and assistance in their academic pursuit.”

Hon. Faley cited greed, poverty and politics of hate and revenge as being stumbling blocks that are greatly destroying the chances of young people.

He said: “ My vision is to support and assist in promoting the free quality education through school feeding programmes, provision of scholarships to students from poor backgrounds but with great academic  potentials and to support science and  technology  by helping to establish  science laboratories  in selected secondary schools across Sierra Leone.”

Although he has been described as an astute former parliamentarian and well-liked politician, Hon. Faley said the feeding has nothing to do with political point scoring, emphasizing that “this venture is non-political and non-partisan.”

He explained that he chose Port Loko District, Northern Sierra Leone because the youth have always showed him love despite the tribe and region he hails from.

“I am a full-fledged member of their major male cultural and secret societies and the people have always embraced me as one of their brothers and sons,” the former lawmaker noted, stating that there should be no place for tribalism and regionalism in the national trajectory. “As I am doing the feeding in Bakeloko, Port Loko, I am equally doing same at my home town in Segbwema Kailahun District Eastern Sierra Leone; so down to tribalism, politics of hate and revenge, marginalization and let us all embrace love, equality, diversity, peace and development because out of many, we are all one country, one people under the rising sun,” Hon. Faley said.

Asked about the total budget involved and source of the money used to do the feeding programme, Hon. Faley said, “it cost approximately nine to ten million Leones of my personal money, although my elder sister Elizabeth Conteh nee Faley gave some amount but I don’t know if she will like it to be made public.”

In response, the BECE students said that the food could not have come on a better day like the day it was served which climaxed the end of the weeks of exams, expressing that some of them used to go to school on empty stomachs because their parents cannot afford food for them.

Musu Brima of Ahmadiyya Junior Secondary School said: “Although Hon. Robin Faley is not here but he has provided food that we appreciate so much. We appeal to him for books, pens and a syndicate. We pray that God grant him success in all that he does.”

Isata Johnny of Wesley Secondary School said: “We are all glad, teachers, examiners, pupils all of us ate more than enough. Hon. Faley is the only one that is doing such, he is a good man and we love him. May God continue to provide for him so that he can do more for us especially after the exams.”

A Parent, Jeneba Moseray thanked God for the life of Hon. Faley, adding, “we can’t pay him because things are so hard for us these days.  I could not even afford lunch for my daughter. We want Hon. Faley to open extra classes to discourage the long distance travelling of our kids and facilitate their studies back home here.”

Saidu Sannoh a teacher at Wesley Secondary School said that they have been hearing about school feeding and the gesture which is not only for pupils but also teachers.

“We need more classrooms and hope that the government and well-meaning individuals like Hon. Faley will help us in this area,” Sannoh said, buttressed by teacher Musa Momoh who said since 2014, Hon. Faley has been providing food for the BECE pupils, noting that they received bags of rice, bundles of water, etc.

“I felt happy, because most of the kids are not coming from financially stable homes, even for us the staff, we were able to eat to satisfaction. We call on other people to emulate Hon. Robin Faley, who has been helping with the town field, etc, at this difficult time in the country,” teacher Momoh said.

Similar views were expressed by teachers, pupils, parents and residents of Port Loko who praised the consistency and unfettered commitment and support of Hon. Faley in many sectors over the years.