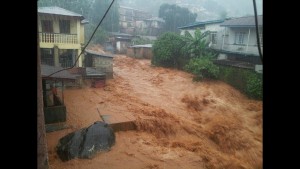 More rain is expected as some residents fear possible mudslides like the ones that devastated parts of Freetown two years ago.

The Chief Coroner, Sinneh Kamara at the central mortuary at Freetown’s main Connaught Hospital told this press that they have in their custody a total of seven dead bodies at the Connaught Mortuary who died as a result of the heavy rains. He added that one was taken from Kroobay, two brought in from the Culvert area, three from Bathurst Village and the rest from other areas.

The three bodies from Bathurst died after a wall collapsed on their home killing all three of them as a result of the heavy downpour.
The Chief Coroner Sinneh Kamara added that they expect more bodies due to the widespread destruction caused by the rains.

Flooding and mudslides in Freetown in 2017 killed nearly 1000 people, with even more reported missing.

At the time, some critics accused the government of not learning from past disasters in a city where many poor areas are near sea level and lack good drainage.