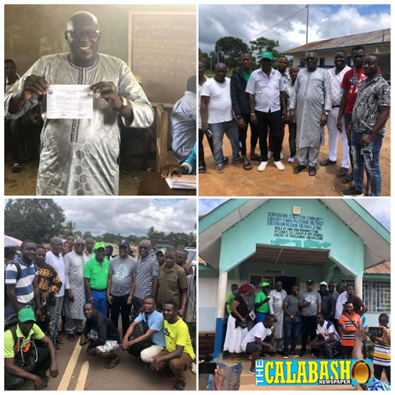 As the Electoral Commission for Sierra Leone (ECSL) continues to conduct the voters’ registration exercise across the country, influential sons of Pujehun District, decided to embark on engaging residents of that district with a view to thoroughly sensitize them on the ongoing voter registration exercise and its importance with the avowed objective of galvanizing them to turn out in huge numbers to register in order  to become eligible for the exercise their franchise next year when the country will be going to the polls.

For now there is intensive voter registration, monitoring, mobilization and campaigning going on in the district.

Led by the Speaker of ECOWAS Parliament, Honourable Sidie Mohamed Tunis ,who doubles as the Honourable Member of Parliament for Constituency 101in Pujehun District, the team comprised the Chief Minister of Sierra Leone – Honourable Jacob Jusu Saffa, the Minister of Information and Communications – Mohamed Rahman Swaray and HE Eddie S. Massallay who is Ambassador Extraordinary and Plenipotentiary of the Republic of Sierra Leone to Liberia and the Sierra Leone People’s Party (SLPP) Chairman of Pujehun District, Mustapha Wai, the SLPP National Liaison  Officer for 2022 Voter Registration Process and others.

With the support of other stakeholders from that district they saw the need to embark on a combined Voter Registration Sensitization in Pujehun District which is located closer to the Sierra Leone – Liberia Border.

The aforementioned personalities have been engaging residents of the district, through radio discussion programmes on Voice of Masoro 90.5FM and other community engagements, geared towards encouraging all qualified citizens to do voter registration.

In a snap chat with Hon Sidie Mohamed Tunis, he stated that to avoid apathy in the district they thought it but fitting to sensitize their people on the significance of participating in the ongoing registration exercise.

He noted that it could be dangerous to form the impression that the residents are knowledgeable of the exercise, what it entails, what they are expected to do and leave it at that but rather to properly ensure that they fully understand the entire process.

On his part, the Minister of Information and Communications, Mohamed Rahman Swaray, underscored that the issue of First Time Voters must be clearly explained to residents of the district so that those who will be turning 18 years of age before the elections are captured in the exercise adding that they are also doing so to discourage those who will not be 18 years not to attempt to register as such is an electoral offence.

“Information is power and what we are currently doing is empowering our people via sensitization in order for them to properly exercise their fundamental human right which is the franchise,” he maintained.

He enjoined all the sons and daughters from Pujehun District to be very realistic in their political choices adding that when it is time to cast their votes they must do so wisely.

Some of the residents of the district copiously expressed gratitude to Hon. Sidie Mohamed Tunis for coming up with the initiative adding that they are now knowledgeable of certain things  which hitherto were not clear to them.