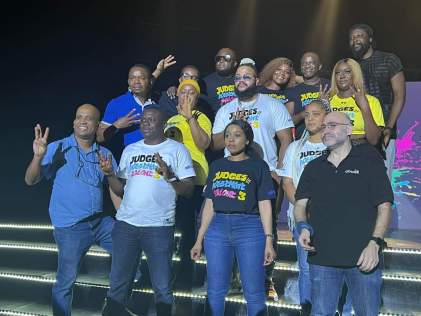 The organizers of Housemates Salone Season 3 with the slogan “Di Game Get Yagba, If You Nor Able Na for Pull Hand” , AYV Media Empire and Africell Sierra Leone, made it a mandatory criterion  that all the vying aspirants for the Reality TV Show, who went through  the audition process and were shortlisted for public voting must undergo compulsory medical tests.

Indeed, it was the Chief Executive Officer of Sing Song Medical Services, Dr. Joseph A.K Kamara, during a Press Engagement who revealed that it is very significant for the aspirants to know their health status which is why they will be medically tested in order to protect the reputation of the AYV Media Empire, where the Show will be hosted, further assuring that the test results will not be disclosed to anyone but rather will remain strictly confidential.

To actualize that stance into reality, on the 16th and 17th May, 2022 all the aspiring contestants were medically tested by the Sing Song Medical Services. The 60 contestants for Housemates Salone Season 3 successfully underwent thorough medical tests for physical fitness and various ailments.

However, it must be noted that public voting continues to get twenty-two out of the current sixty (60) contesting aspirants who are presently stiffly competing to secure the highly coveted twenty-two (22) spaces and such will come to an end until 7:00pm on the 22nd May, 2022.

Organizers of the Reality TV Show, the Africa Young Voices (AYV) Media Empire and Africell-SL thought it wise that to make it very democratic, by the giving all the aspirants an equal opportunity, to come up with channels through which members of the public could cast their votes in order to determine those who will qualify to enter the House shortly prior to the commencement of the competition. To vote for a particular aspirant, members of the public could easily send the numbers of their favourite candidates via SMS to: 5500 or Dial *5500#.  For International voting an individual can call: +23299005500.

The numbers referred to here are not the telephone numbers of the aspirants but rather those that were assigned to each of them ranging from 1 to 60.

Members of the public are also at liberty to cast their votes via Afrimoney through voters’ Africell Sim Cards by dialing *161*10#* plus the Numbers of their favourite contestants from any Africell line or code.

There is also  a new online voting platform and a brand new website for international voters across the world to vote using credit or debit cards by just visiting:  https://housematessl.com and/or visit: https://www.africell.sl.

Once Housemates Salone Season 3 commences on the 22nd May 2022 members of the public could watch it live 24/7 on AYV Entertainment Channels 34 & 33 and AYV on DSTV Channel 399.

This is a unique opportunity to showcase the Sierra Leonean story and in particular Season 3 of Housemates Salone to the continent’s most populous and known nations for entertainment – Nigeria and Ghana.

Indisputably, AYV believes that the Sierra Leonean story must not be limited by boundaries but must be seen and heard across nations, continents and the world.

What is in store for the Housemate that will emerge as the ultimate winner of the competition is a Star Prize of Two Hundred and Fifty Million Leones (Le 250M) plus a round trip to Dubai.

Also, one of the sponsors of the Reality TV Show, Zarlux Car Rental, has revealed that a brand new car will be given to the winner of the Zarlux Car Rental task that will be performed by the Housemates in the House during the course of the show.

Members of the public should know that their votes do matter and as a result they must step up the pace at which they are voting for their favourite Housemates as the countdown narrows down.