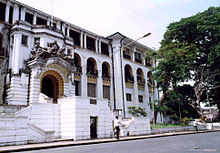 Where corruption exists, the rule of law cannot flourish. It is easy for corruption to thrive in a nation where the Judiciary is blind and the Government feels comfortable with things as they are.
As such, the relationship between corruption and the justice system is crucial to sustainable growth in Sierra Leone which is why strengthening the rule of law and intensifying the fight against corruption should be a major concern for all.
Corruption in the Judiciary which is as old as post-Independent Sierra Leone that involves unethical practices like taking money to pervert the course of justice by twisting evidence, hiding dates for proceedings from defendants or complainants, depending on who has bribed court officials, endless adjournments, causing case files to go missing to frustrate litigants, etc, is, to say the least, why everybody in the country, including our MPs and even President Bio to, have a dim view of our men and women in the bar and courts.
To a Sierra Leonean who has for decades been disillusioned about the integrity, competence and impartiality of the country’s Judiciary in delivering honest, speedy justice to particularly poor citizens who cannot afford to hire costly lawyers to defend them, Francis Ben Kaifala’s assault on that bastion of inequity by conducting an unannounced investigation at the Master and Registrar and Judiciary Accounts Department, where it is believed hundreds of thousands of dollars have over the years been siphoned by unscrupulous officials, is sweet music.
The “Justice System” is the Governmental entity that is charged with enforcing the laws of the land with integrity and veracity. The relationship between corruption and the Justice system is critical, especially in a developing country like Sierra Leone.
Needless to say, in every country, the Justice system exists to ensure a fair treatment of citizens and that the Rule of law and legal system is effective. The status of the justice system in a country is largely dependent on the quality of the Government and its commitment to the fight against corruption. For instance crimes and their commensurate punishment are enforced by the justice system and without these measures; there can be no equity, no inclusivity, no fairness and no lasting social and economic development, hence a fertile breeding ground for corruption.
According to Reginald Fynn Jr. Esq. – Director of Intelligence, Investigation and Prosecution at the Anti- Corruption Commission – “the present state of corruption and the justice system is more hypothetical and academic. Recent judgments are indicative that the judiciary takes corruption cases seriously and continuing to hand down firm judgment will send the correct signal that corruption is intolerable”.
Corruption in any judicial system erodes the ability of the State and international community to tackle transnational crime and terrorism; diminishes trade, economic growth and human development; and, most importantly, it denies citizens impartial settlement of disputes with neighbours or the authorities.
When the latter occurs, corrupt judiciaries fracture and divide communities by keeping alive the sense of injury created by unjust treatment and mediation. Judicial systems debased by bribery undermine confidence in governance by facilitating corruption across all sectors of Government, starting at the helm of power. In so doing, they send a blunt message to the people in this country that corruption is tolerated.
A good judiciary empowers citizens to speak out against corrupt practices and corrupt officials. Increased confidence in the system and just punishment for offenders cannot be guaranteed if the judicial system is flawed. A corruption free judiciary increases the confidence level of the citizens; confidence in the judges, lawyers, court clerks associated with the judiciary.
Too many people fail to understand the impact of corruption on development and on prosperity. The victims exist in every developing and less developed country like Sierra Leone. More often citizens find themselves asking the question “if that which is meant to save now becomes that which kills where will the people run to in their quest for justice, peace and development”.