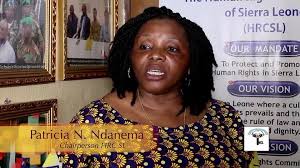 It continued that for such a mandate to be smoothly carried out and for the enjoyment and fulfilment of any right, be they civil and political; economic, social and cultural; and development rights; peace and national security must be paramount and must go undisturbed.

The HRCSL, pointed out, that in its general monitoring role it has been monitoring different social media platforms which have recently been flooded with hate messages and diatribes from Sierra Leoneans both within and outside the country with the aim of inciting civil and political unrest and ultimately bringing the State to a standstill.

The institution vehemently and roundly condemned all forms of hate messages and diatribes and all the pioneers and promoters of same and as such called on those persons behind such unpatriotic practices to desist from such acts forthwith.

According to the statement, the HRCSL has been one of the foremost defenders of free speech as it consistently called on successive Governments through its Annual State of Human Right Reports, strategic and media engagements to repeal the criminal and seditious libel law contained in the Public Order Act of 1965- a call that has now been recently adhered to by Government.

The HRCSL says it abhors messages of hate and division as they do not constitute the free speech envisaged by the repeal nor do they constitute the spirit and intent contained in Section 25 Subsection (1) of the Constitution of Sierra Leone, 1991, Article 19 of the Universal Declaration of Human Rights (UDHR), Article19 (1) & (2) of the International Covenant on Civil and Political Rights (ICCPR).

Accordingly, Article 20 (1) & (2) of the ICCPR clearly prohibits propaganda that promotes war and any advocacy that promotes violence. Similarly, Subsection (2) of Section 25 of the Constitution of Sierra Leone, 1991 provides for exemptions in respect of freedom of expression where the circumstance has to do with security of the state, public safety, public order, morality and health; and for the purpose of protecting the reputations, rights and freedoms of other persons, etc.

The HRCSL used the opportunity to remind Government of its primary State obligation to provide security for its citizens and everyone staying in Sierra Leone as provided by Section 5 (2) (b) of the Constitution of Sierra Leone 1991 for ease of reference.

The HRCSL, therefore urged the Government and its relevant agencies to ensure that the security of the State and its people is safeguarded at all times within the confines of the laws of the land and international covenants and protocols to which Sierra Leone is a State Party.

In a similar vein, the HRCSL again used the opportunity to call on citizens to abide by the provision contained in Section 13 of the Constitution which provides mandatory Duties of the Citizen which includes but not limited to: “a sense of nationalism and patriotism so that loyalty to the State shall override sectional, ethnic, tribal or other loyalties; protect and preserve public property…; ensure the proper control and upbringing of his children and wards; render assistance to appropriate and lawful agencies in the maintenance of law and order.”

Additionally, HRCSL is drawing the attention of everyone to the provisions contained in Article 29 (3) & (4) of the African Charter on Human and Peoples’ Rights (ACHPR) thus: (3) “Not to compromise the security of the State whose national or resident he is;” and (4) “to preserve and strengthen social and national solidarity, particularly when the latter is threatened”.

HRCSL therefore called on every citizen at home and abroad to desist from producing and promoting all forms of hate messages and diatribes and to be law abiding, discipline and participate in and defend all democratic processes and practices responsibly as per law required.

HRCSL says it is assuring the general public of its unwavering commitment to the promotion and protection of human rights of all.