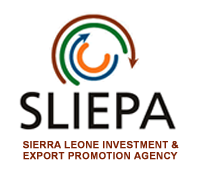 On the 11th August 2020, the Export Development Department of the Sierra Leone Investment and Export Promotion Agency (SLIEPA) ended a strategic engagement with the Ministry of Agriculture and Forestry (MAF) and some agribusinesses in Bombali and Karene Districts.

The objective of the meeting was to obtain updates in line with agricultural activities that are germane to export development for SLIEPA’s intervention. Speaking to the hosts, the Ag. Director of Export Development, Bobson Margai, explained the formation of SLIEPA and its continuous role as a major export development and investment facilitation agency in Sierra Leone.

He said, the meeting was to understand how the agribusinesses are faring on in the advent of COVID-19 and to obtain relevant updates on agricultural activities; especially information targeting agribusinesses dealing with key priority crop production, processing and marketing. Such a data, he said, would be useful for the export development drive that the Agency is undertaking.

He said the motive of the drive is to upsurge export growth, which means increasing the national income, create employment opportunities, correct the Balance of Payments problems and improve citizens’ livelihood. He further opined that, the export development drive is a continuous process, mentioning the series of previous trainings that SLIEPA has conducted across the country that educated agribusinesses on the necessities for accessing the international market.

While making his submission, the Chief Executive Officer (CEO) of SLIEPA, Sheku Lexmond Koroma, thanked MAFFS for its contributions to the development of Sierra Leone; saying that creating a productive synergy among Ministries, Departments and Agencies (MDAs) mitigates difficulty in accessibility and at the same time increases performance.

Mr. Koroma noted that his Agency is looking at developing export in order to maximize it as against the huge amount of importation of products in the country.

He encouraged the agribusinesses to comply with international standards in cultivation, and processing of produce to achieve high quality that will attract international market, increase profits, revenue and extend customer base. Irrespective of the impact of COVID-19 on the country, he said, the New Direction Government led by the President, Brigadier (RTD) Julius Maada Bio, is determined to boost agriculture, transform the lives of the ordinary people as it is evidently seen in deliverable actions taken.

The CEO reiterates President Bio’s appeal to focus on delivery in 2020. As he welcomed the SLIEPA team, Mr. David Felix Sellu-Sallu, the Bombali District Agricultural Officer, (DAO) thanked SLIEPA for its collaborative efforts.

He said that, establishing farms is their major role, saying that the District does well in rice, cassava, cashew and vegetable and it has 3,143 hectares of cashew farms that were established by private individuals and from seedlings given out to farmers by MAF, COOPI and Balmed Holdings which is a cashew exporting organization. He said they have twelve Agribusiness Centers (ABCs) that are in rice, cassava and other crops processing to trade in the weekly local markets.

DAO continued that the sugarcane farm established by Sun Bird is their biggest employer. He said they had one hundred and thirty-five thousand (135,000) heads of livestock as per the Food and Agricultural Organization (FAO) report 2016- 2017. He concluded by mentioning that honey has a high yield in the District.

An official of the Sierra Leone Agricultural Research Institute (SLARI) in Bombali, said cassava production in Bombali has been gradually growing in all aspects of `the value chain; explaining that SLARI has released about fourteen high yielding improved varieties to farmers.

He stated that they have established processing centers with out-growers that are organized into cooperatives that cultivate and process cassava with the help of SLARI in partnership with Village Hope and Transformation of African Agricultural Technology (TAAT), a project that intends to support about hundred cassava farmers to cultivate two acres each.

He ended up by asking SLIEPA to help link them with markets for their Orange Fleshed Sweet Potatoes. Also, Mr. Abdul Munu, the head of Mabuduka Agro Farm Salone Limited, in Forod Loko, Kerene District, told SLIEPA that they cultivate vegetables, cocoa, maize, cassava, peanut and are now growing cocoa and cashew on about two hundred acres of land.

He said that they are also in nursing partnership with SOLIDARIDAD (34,000 cashew and over 3,000 cocoa seedlings) and COOPI (20,000 cashew seedlings). He pleaded with SLIEPA to link them with more investment opportunities for expansion.