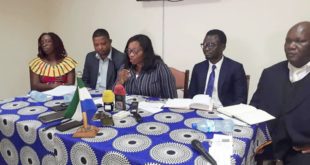 The Human Rights Commission of Sierra Leone during media monitoring noted that the Paramount Chief Melrose Foster Gberie of Kpanda-Kemo Chiefdom Bonthe District and her sister, were allegedly attacked by some unidentified members of the Poro Society during their initiation ceremony on Sunday 11th January. It was further alleged that the said sister was raped.

The institution then undertook a fact finding visit to Motuo village and Mattru Jong town in the Bonthe District on the 21st and 22nd January 2020.

The HRCSL on 21st January also visited the Aberdeen Women’s Center in Freetown where the sister was transferred for medical treatment.

The HRCSL engaged Paramount Chief Melrose Gberie, the LUC and other officers at Mattru Jong Police Station, the Councilor of Ward 320, medical personnel at UBC Hospital Mattru Jong and the victim (sister) at Aberdeen Women’s Center. Other engagements were held in Freetown with the Ministry of Local Government, the Sierra Leone Police and the Council of Paramount Chiefs.

After those undertakings the institution made the following findings : That there is an existing “Guidelines for the Organisation of Secret Societies in Sierra Leone” circulated by the Ministry of Local Government and Rural Development dated 13th December 2019 which requires authorization from the Paramount Chief/District Officer in order for secret society activities, including those of Poro society, to be undertaken.

It also discovered that on the 11th January 2020, the said Guidelines were flouted by members of the Poro society, who conducted initiation without the relevant authorization.

The organization noted that the movement of non-members of the Poro society in the township was restricted without prior notice while the initiation was ongoing.

That the residence of Chief Gberie was surrounded and attacked by a large crowd of men who were members of the Poro Society whilst reigning insults and threatening remarks against her.

HRCSL again found out that the door and windows of the Chief’s house were damaged as a result of this incident.

Chief Gberie confirmed that she was not physically assaulted but that she spent 7 hours under siege.  She alleged that Fourteen Million, Five Hundred Thousand Leones, five pregnant goats, one plastic chair and her Necklace (which is the symbol of her authority as Paramount Chief) and several personal effects were looted.

That a Police Officer from Mattru Jong was deployed at the Chief’s residence following the incident.

It also learnt that the Chief’s sister was abducted that same night by approximately 15 men and on the following day (12th January 2020) was rescued by the Mattru Jong Police at an abandoned building in an unconscious state. She was taken to the UBC Hospital Mattru Jong, Bonthe District and later transferred to the Aberdeen Women’s Clinic in Freetown.

That Medical personnel at the UBC Hospital Mattru Jong and the Aberdeen Women’s Centre confirmed the Chief’s sister was physically and sexually assaulted.

The Police confirmed that no arrest was made on the day of the incident due to the limited number of police personnel on the ground as they would have been overpowered by the Poro members. However, an arrest has now been made since HRCSL’s visit.

HRCSL’s efforts to contact other traditional leaders, including members of the Poro society, proved futile. According to the police, they were all on the run following the incident of 11th January.

With regards Human Rights Abuses the organization noted the following :

The HRCSL came up with these recommendations after engagements with some of the relevant stakeholders: The Ministry of Local Government and Rural Development should work with local authorities and other relevant stakeholders to popularise the “Guidelines for the Organisation of secret Societies in Sierra Leone” in a bid to avoid a recurrence in other communities.

That the Council of Paramount Chiefs should consistently engage heads of secret societies on how they should conduct themselves without hindrance to the enjoyment of rights of non-members of their secret societies.

The Sierra Leone Police should expedite the ongoing investigation into the incident and increase security in the Motuo village.