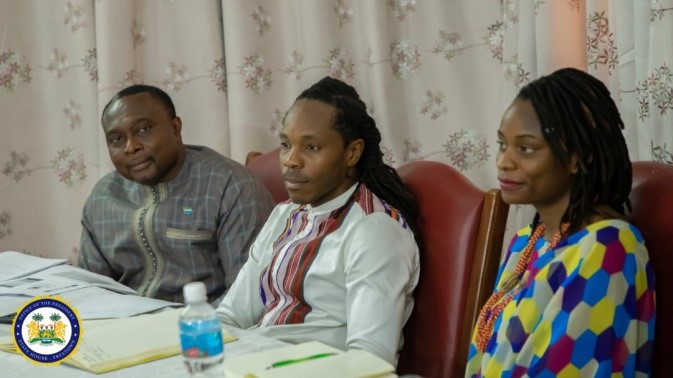 In his welcome address, Presidential Adviser and Head of Strategic Communications, Dr. Patrick Muana, said that they were pleased to have a discussion around the implementation of government’s flagship programme. He also stated that the HCD was crucial because it bothered on the growth of the country, adding that the government had set specific goals that should be achieved in the areas of education, health and food security.

A member of the Secretariat, Wilsona Jalloh, said that President Julius Maada Bio had defined his focus on Sierra Leone under his Human Capital Development flagship portfolio, which included providing quality education, improved health care delivery and food security. She said that the HCD tracking team is leveraging technology, data, innovation and evidence to implement catalytic initiatives that would contribute to meeting their targets.

She also noted that the flagship programme looked forward to achieving targeted results by 2023, adding that they are expected to double the number of boys and girls with functional literacy skills in primary school, halve the maternal mortality rate and reduce by 11 per cent the rate of stunted children under 5 and achieve 90 per cent self-sufficiency in rice production and increase domestic share of marine fish catch within limits of sustainability.

Country Head of Tony Blair Institute, Emily Stanger Sfeile, said that achieving the targets would make Sierra Leone a global leader in HCD. She added that success was possible if they could leverage evidence, data and global experience to design, test and scale the most promising and impactful approaches, while fostering a new standard of excellence that thrived on ambitious delivery timelines.