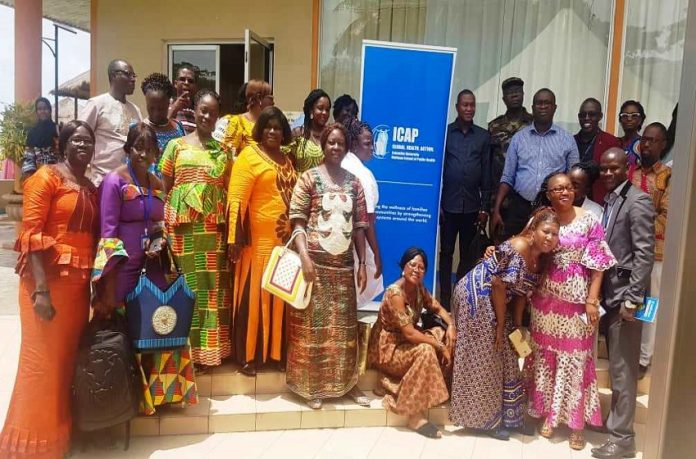 In its mission to step up and strengthen the health system in the country ICAP has ended their Infection Prevention and Control (IPC) Change Package Scale-up and Maternal Child Health QI project on Friday 6th September 2019.

The ceremony which took place at the Bintumani Hotel provided ICAP the opportunity to showcase their successes of implemented projects, present change packages for scale up to other health facilities, and discuss sustainability and scale-up plans.

ICAP, supported by CDC, partnered with the Ministry of Health and Sanitation (Directorate of RMNCH, the NIPCU and National QoC) to improve compliance to Partograph utilization at Hospital level by tracking all the 5 output/ process measures of Hospitals across Port Loko, Kambia and Western Area Urban Districts.

She maintained that a vital component of these activities has been focused on empowering facility-level teams to design and implement QI projects to enhance infection prevention and control (IPC) and Maternal Health Care through the use of Partograph and monitoring of vital signs.

She stated that to help bridge the gap between best practice and common practice on IPC to these four selected hospitals, ICAP spread the IPC RIM full charge package to the labor wards in collaboration with NIPCU.

She noted that the implementation of the QI project was as a result of a rapid situation assessment that showed low compliance in the use of Partograph across the four districts and poor IPC compliance was also noted during the assessment.

Improving maternal health is one of the Millennium Development Goals (MDGs), which has seen Government, NGOs, and individuals devote efforts in achieving it. Although the maternal mortality ratio has declined by 45 percent worldwide, the proportion of mothers that do not survive childbirth compared to those who do-in developing regions is still 14 times higher than in developed regions (United Nations, 2015). It is estimated that about 830 women die from pregnancy – or childbirth-related complications around the world everyday (WHO, 2016).

He referenced that in 2017 CDC established a country office in Freetown to support global health security agenda and they are working in four areas and their operation is with the Ministry of Health.

She pointed out that IPC is keen to quality improvement as it is the backbone citing that they have to ensure hospitals are infection free.

Ministry of Health and Sanitation National Quality Reproductive and Child Health Management Program Manager, Margaret Titty expressed hope and sustainability of the lesson they have achieved and learned.

She noted that the data will go down further by the next three months and whatever gains they have achieved in those districts they are going to maintain it.