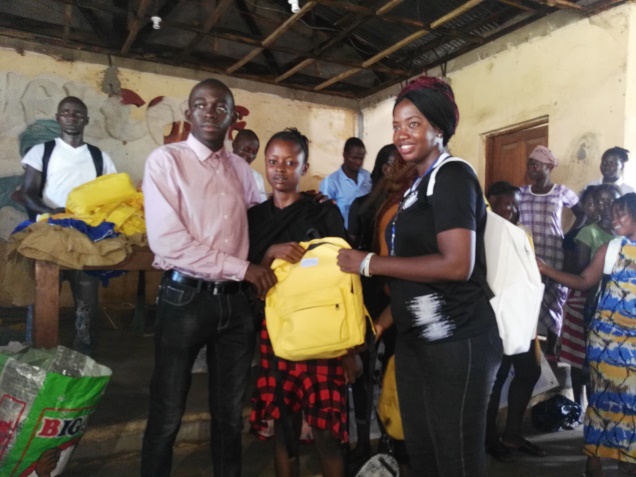 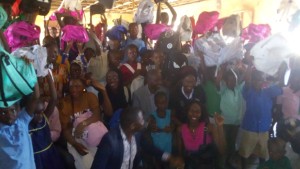 Pleasant Children Foundation (PCF), a non-governmental organization, that is geared towards promoting education for children has on Wednesday 18th September, 2019 donated school items worth over millions of Leones to 250 Children during their annual event which was tagged “Each one Educate One Campaign to Send Orphan, Street Children and Less Privileged Kids to School” at the Rokel community Centre, Rokel Village in the Western Area Rural District.

In her address to the audience, Marian Pleasant Kargbo, Chief Executive Officer/ Founder Pleasant Children Foundation (PCF), disclosed that during the past four years her organization has been working tremendously in order to support children within the Western Rural District with scholarships and school items worth millions of Leones.  She added that funding was a major challenge to actualize the gesture but extended thanks to the Centre Foursquare Gospel Church USA for serving as the major sponsor by supporting 100 children furthering in extending gratitude humanitarians who believe in what their organization stands for and the work they have been doing over the years.

She called on humanitarian organizations and individuals to support them in order to help more children, adding that their dream this year was to target 500 children but because they were financial challenged they were only able to cater for 250 children but said with additional support they can still cater for the reaming 250. She said that this year they also included teen mothers by sending them to school.

Deputy Chairman, Western Area District Council, Robert A. Browne, on behalf of the Council thanked Pleasant Children Foundation for the gesture saying it is not only important but also timely as pupils in the Western Area Rural District are really challenged with school materials.

He admonished pupils to take their studies serious underscoring how education is the key to success, adding that education is a process of learning that one goes through in order to become somebody in society. In that vein he encouraged them to take this is an opportunity for them to achieve their dreams and become great people in society who will in return give back to society.

He made his commitment on behalf the Western Area District Council that they will always give support to the organization in order to promote education in the District.

Deputy Minister of Social Welfare, Gender and Children’s Affairs Mohamed Haji-Kella, who was also in attendance, said that their Ministry is committed in dealing with children issues across the country. He appreciated the Pleasant Children Foundation for the donation adding that as a Government they are committed to providing quality education.

He admonished parents and children to desist from examination malpractices as he said such will hinder them in the future but encouraged them to take their study serious as education is the key to success.

Mariama Kamara, a beneficiary and a teen mother thanked the Foundation for sending her to school again stating that hitherto accessing school learning materials was really a huge challenge for her.

She called on other humanitarian organization to support the Foundation in order for them to continue to benefit from programmes or projects that they will be implementing.