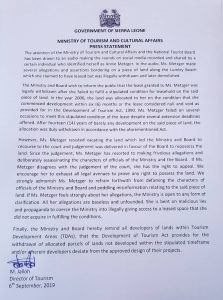 In a very swift and calculated manner the Ministry of Tourism and Cultural Affairs has vehemently debunked a social media audio post said to have been authored by one Annie Metzger. The audio contained several allegations and an assertion made by the Annie Metzger relating to a piece of land along the Lumley Beach which she is claiming was leased but was illegally withdrawn and later demolished.

According to the Ministry and its Board, the lease that was granted to Metzger was legally withdrawn after she failed to fulfill a stipulated condition for leasehold on the said piece of land. They disclosed that in 2000 the land was allocated to her on the condition that she starts development within six months otherwise it will be considered null and void as provided for in the Development of Tourism Act 1990.

“She failed on several occasions to meet the stipulated condition although extension deadlines were offered and after fourteen years of barely any development the allocation was duly withdrawn,” an official explained.

It was further understood that Annie Metzger refused to vacate the piece of land leading the Ministry and Board to recourse to litigation. The court delivered verdict in favour of the Board to repossess the land. However, after the judgment the disenchanted Metzger resorted to making frivolous accusations and deliberately assassinating the characters of officials of the Ministry and Board.

The latter has made it categorically clear that if Annie Metzger is dissatisfied with the judgment she has the right to file an appeal to claim that she is the rightful owner of the said piece of land.

They stated that they are admonishing her to desist from smearing the image of the Ministry and officials of its Board claiming that all her allegations are baseless and unfounded.

In another related issue the Ministry and Board is reminding all developers of land within Tourism Development Areas (TDAs) that the Development of Tourism Act provides for the withdrawal of allocated pieces of land not developed within the stipulated timeframe and/or wherein developers deviate from the approved design of their projects.