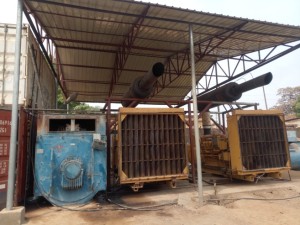 Residents of Bo district are pleased to be enjoying improved electricity supply. President Julius Maada Bio’s promise of providing quality and affordable electricity supply is yielding a successful dividend in the southern city of Bo, where the people have acclaimed his Government for providing improved electricity supply. The electricity supply success story in Bo City is driven by EMCO Construction and Logistics Limited, which prides itself to be one of the best Independent Power Producer (IPP) in the electricity sector. The company has since its inception last year, massively improved electricity generation thereby benefiting thousands of households.
EMCO’s two brand new Caterpillar generators have increased the mega wattage and company officials have promised further increase in the coming months.
The Logistic Manager Sahr Abu Sam in an interview pointed out that, they have being in charge of generating electricity and supply to EDSA since the current administration acceded power in April last year. Our machines are up and running 24/7 round the clock; but it is EDSA that determines what goes out to the public and the area(s) they are supplying electricity, Mr. Sam said.
We don’t have control over the supply of light to the township but believe you me, any area(s) that get light based on their schedule fully enjoy the facility, he added. The EMCO strongman said, they always ensure that there is adequate fuel supply in the bowser capable of containing 22,000 litres of fuel. “The people of Bo Town are enjoying considerable supply of electricity at the moment as compared to before now,” said Sahr Abu Sam.
However, he furthered that, the challenge is for EDSA to improve on the distribution network in the entire township. The EMCO Construction and Logistics Manager explained that most of the distribution lines are old and as a result of that, people experiencing drops along the supply chain or called it leakage which is responsible for the fluctuation of electricity supply in some areas. In some other areas, the light is dim because of the drop in voltage. The solution he said is squarely rest on the shoulders of EDSA.
Sahr Abu Sam furthered that as an IPP entity, they are working assiduously alongside an Italian mechanical engineer based in Sierra Leone to get the other four Allen Machines running and hope that by the end of the year all of the plants will be in operations. If, we’re able to achieve that, then the supply of electricity will improve considerable for the entire township and its environs.
An entrepreneur running business at the city centre, Madam Agnes Sandi gave glory to God and the Rtd. Brig. Julius Maada Bio SLPP led government for the improvement of electricity supply which she noted is also helping to enhance commerce.
Agnes Sandi noted that she had spent huge sums of money in the past in a bid to get sustainable amount of electricity supply buying fuel and for the maintenance of her generator.