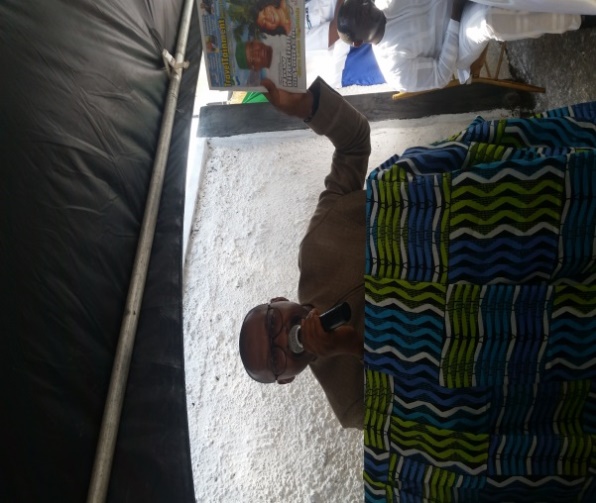 On the 5th February 2019 the Ministry of Tourism and Cultural Affairs launched the first Tourism In-Flight Magazine as well as officially opening the First City Tourist Information Centre at the Sierra Leone museum in Freetown.
Launching the magazine, the Vice President of the Republic of Sierra Leone, Dr. Juldeh Jalloh commended the Minister of Tourism and the Acting General Manager of National Tourist Board for taking the tourism to another level.
He stated that tourism is one of the top priorities in the New Direction and as a Government they will ensure that tourism in Sierra Leone is made more attractive more to tourists.
He noted that to improve tourism there must be strong policies that will allow Sierra Leone tourism to meet international standards.
The Vice President said the magazine will market Sierra Leone to attract more visitors, adding that tourism is one of the areas Government is paying more attention because it generates revenue for the country.
He informed that they have tried to ensure that the prices of flight tickets are reduced so that the country will be open to businessmen to invest
He stated that the City Information Centre will give the opportunity to citizens and non-citizens to know more about the country’s tourist destinations.
He advised the Minister of Tourism to continue to collaborate with more sectors especially the private to ensure that people invest in tourism.
The Minister of Tourism and Culture, Dr. Memunatu Pratt said that the In-Flight Magazine will showcase the potentials of Sierra Leone.
She informed that this is another milestone in the rebranding and changing of the mind-sets of Sierra Leoneans and making tourism a household name in country.
She noted that the magazine is very important because it will promote culture and tourism.
The Minister underscored how the magazine will give people the opportunity to read and know about positive things that are coming from Sierra Leone, saying that this is also one way of changing the negative mind-sets about the country.
She explained that the magazine contains information of all tourism destinations in the country and it also showcases the progress that has been made in the past nine months in the tourism sector, pointing out that there is the political will which has helped to strengthen the sector.
She added that this is the first time in the country’s history to have such a magazine noting that will expose Sierra Leone internationally.
According to the Minister the first flight magazine is a manifestation that the country is ready for business.
She informed that over the years tourism was nothing good to write home about but pointed out that the New Direction is determined to rebrand and market the sector.
She furthered that they have been collaborating with other Government agencies and the private sectors.
Speaking about the City Tourism Information Centre, the Minister emphasized that the centre is vital in the sense that it avails the opportunity for citizens and non-citizens to know more about the country’s tourism sector.
She said tourism is important to everyone and she used the occasion to call on people to market the country’s tourism on both national and international platforms.
She assured that Sierra Leone tourism will never relegate as tourism is now at the centre of her heart.
In her statement, the Acting General Manager of the Sierra Leone National Tourist Board (NBT), Madam Fatmata Abe-Osagie said that they are determine to transform the tourism sector by attracting more tour operators to visit the country.
She disclosed that from October to December 2018, the country recorded the highest visitors compared to 2017.
According to the Acting GM the country recorded an estimate of 10.5% of visitors’ arrivals in 2018.