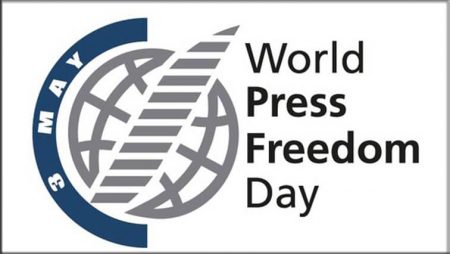 This year’s theme for World Press Freedom Day is, “Media for Democracy: Journalism and Elections in times of Disinformation.” The World Press Freedom Day is annually observed on May 3 to inform the international community of nations that Freedom of the Press and Freedom of Expression are fundamental Human Rights.
World Press Freedom Day was proclaimed by the United Nations General Assembly in December 1993, following the recommendation of the United Nations Educational, Scientific and Cultural Organization (UNESCO) General conference.
Since then May 3, the anniversary of the Windhoek Declaration is celebrated worldwide as World Press Freedom Day It is an opportunity to:
* Celebrate the fundamental principles of press freedom;
* Assess the state of the press throughout the world;
* Defend the media from attacks on their independence;
* And to pay tribute to journalists who have lost their lives in the line of duty.
Plethora of journalists have been arrested and detained unlawfully and at some point killed for reporting on issues of public interest and social injustice. Reporting on crimes, politics and corruption should no longer be a matter of life and death as it is evident in Sierra Leone and some other parts of the world. The media play a crucial role in covering the devastating effects of maladministration and provide citizens with germane information that enable them to stand up against those vices in society.
An independent and free media is a solid cornerstone for democracy, a vital pillar of national integration and consolidate democratic good governance. It is a public watchdog on the abuse of power by politicians, surreptitious dealings and corruption. Therefore, to unearth these vices in our society and body politics, the press should be free from draconian and obsolete colonial leftover laws that impede its fundamental functions of informing, educating and entertaining, as espoused by the French philosopher Louis Althusser.
Press freedom is a fundamental Human Right that is recognized and protected in Sierra Leone and beyond. It is the democratic and constitutional right of the media to hold the government and it officials accountable to the citizens. In that vein, the mass media is expected to function independently without external censorship and any kind of unlawful imposition of a legislation that runs contrary with the spirit of the National Constitution of Sierra Leone Act No.6 of 1991.
This year’s theme is explicitly coined for media and non-media practitioners to know that, the mass media is a tool that promote and enhance a functioning and sustainable democracy. The mass media in Sierra Leone have tried to promote democratic tenets in Sierra Leone. It is crystal clear during the March 2018 general elections; the media played outstanding role in ensuring we have a free, fair and transparent elections. They have a responsibility to report political happenings; but they should not misinform citizens because that will render them to make shortsighted and sentimental decisions.
Journalism is a sacred profession like any other profession you can think of. Because you can read and write do not guarantee you a place in the profession, if you do not abreast yourself with it ethical principles. People should stop seeing Journalism as a waiting ground for greener pastures job, rather they should see it as life ending career. The world has journeyed to the information and communication era that is characterized by massive development in technology and the unending quest to know. In that backdrop, professional journalists should take the front seat.
If this profession is left in the hands of quack journalists who lack the passion and desire to report daily happenings then the world is heading for doom. May 3 is marked for the brave souls of those dedicated and altruistic journalists for them to continue to rest in jollification. Let us celebrate and remind our current soldiers in the news business that they have done well but a lot is left to be done. Part 5 of the Public Order Act No.46 of 1965 should be repealed as promised. Politicians should not have a shade to lean on. Journalists should continue to report responsibly as expected.