As part of their continuous support towards the fight against the COVID-19 in the country, the Indian Community has on Wednesday 19th August, 2020, handed over a newly refurbished Accident & Emergency Department to the 34 Military Hospital during a ceremony that was held at the Hospital’s Conference Hall at Wilberforce in Freetown. 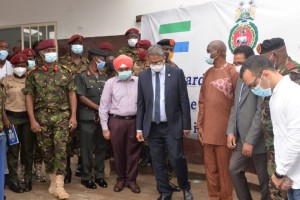 Delivering a statement on behalf of the Minister of Defence, Rtd. Col Murrana Massaquoi, who happens to be his Deputy, on behalf of His Excellency the President, Julius Maada Bio, Government and People of the Republic Sierra Leone, expressed heartfelt thanks and appreciation to the Indian Community in Sierra Leone for such an invaluable contribution to the country’s health infrastructure.

He said when COVID-19 struck, Sierra Leone like all other countries across the globe was taken by surprise by the invincible enemy, which he said, continues to devastate the human race and that unlike other crisis before it, the global pandemic ruffled and continues to challenge the country’s well-wishers and international partners whose supports have been critical to the country’s fight against adversity, adding that initially, the outbreak shook  all and even the inspirational Commander in Chief of the Armed Forces, His Excellency the President, Dr. Julius Maada Bio who made a passionate call for solidarity in the fight against COVID-19 in Sierra Leone.

He said at NaCOVERC, they were compelled to take the toughest decisions based on the existing circumstances aimed at not only defeating the virus but also efficiently protecting a health sector that was seriously challenged prior to the pandemic.

Rtd. Col Murana Massaquoi furthered  that when the Minister of Defence heard about the renovation of the Accident and Emergency Department at the 34 Military facility, he knew the call for solidarity by His Excellency the President has been solidly answered by the Indian Community in Sierra Leone pointing out that such an assistance can only come from a sincere partner also furthering that he is particularly thrilled by the venture as infrastructural improvement is key on the RSLAF’s agenda also expressing optimism that the facility will surely help to improve on the existing infrastructure at the hospital.

He stated that the refurbished structure assures serving personnel and the entire public that RSLAF and in particular 34 Military Hospital is primed to continue provision of health services as it is in line with the Commander in Chief’s vision to see the health system strengthened.

He also extended appreciation to the Commanding Officer, Joint Medical Unit (RSLAF), Colonel (Dr.) Stephen Sevalie, for his enthusiasm and continued devotion to duty and wished whole heartedly the officers, men and women of the Unit for their selfless services to the nation.

On his part, the representative of the Indian Community, Harish Agnani applauded the COVID-19 Response Team for their tremendous work in fighting to curtail the spread of COVID-19 in the country.

“The reason for the establishment of the Indian Community is as a result of the warm reception we continue to receive from the local community,” he maintained for which he said he wants to extend thanks and appreciation to the People of Sierra Leone.

Harish Agnani said, over the years, they have been supportive to various causes across the country through their charitable activities, adding that in times of crisis they always come together and render support jointly.

He said since the outbreak of COVID-19 in the country things have changed but applauded the Government for its timely intervention and the preventive measures instituted by the Ministry of Health and Sanitation which makes the country more proactive in combating the pandemic in the country.

Harish Agnani noted that when COVID-19 struck, Sierra Leone the Indian Community decided to complement the efforts of the Government in the fight against the virus.

He further revealed that the Indian Community handed over food items and Personal Protection Equipment to members of staff of the Fourah Bay College Isolation Centre etc.

He said they spent over 600 Million Leones for the refurbishment of the Accident & Emergency Department to the 34 Military Hospital which he described as one of the biggest donations they have done in recent times.

He extended thanks and appreciation to members of the Indian Community who contributed towards the project.

Earlier on, delivering a welcome address, the Case Management Pillar Lead COVID-19 Response, who also doubles as Commanding Officer JMU, Colonel Dr. Stephen Sevalie, expressed appreciation to the Indian Community for the Refurbished Accident & Emergency Department at the facility which he described as a timely intervention by the Indian Community.