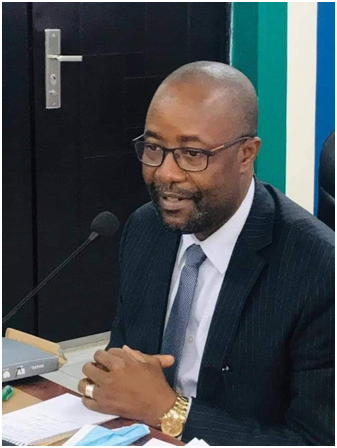 During the 77th Session of the United Nations General Assembly (UNGA) and in particular the Climate Week, held from the 19th to 21st September, 2022 in New York, United States of America, an ambitious platform was created to drive global climate action.

On behalf of Sierra Leone the Minister of Information and Communications, Mohamed Rahman Swaray, on the 22nd September, 2022 delivered an all embracing statement.

The Minister started by expressing joy to join all in the August gathering on climate and went further to extend gratitude to the Government of Kenya, through the leadership of H.E President William Ruto, for inviting Sierra Leone to join the Partnership.

The Minister underscored that the Governments of Sierra Leone and Kenya have been co-championing transformative initiatives aligned to technology and its impact on sustainable development pointing out that now the collaboration is called to do more.

He said as all may know and as clearly amplified in the remarks by Heads of State and Governments at the 77th UN General Assembly, the world is in a climate emergency adding that the statement may ring hollow but all are now deeply reminded of the shocks of climate change.

“Africa, more than any other part of the world is bearing the brunt of this existential threat,” he lamented pointing out how African countries are experiencing prolonged drought, biodiversity loss, increased climate-related disasters amidst a global pandemic, energy crisis and food insecurity.

Mohamed Swaray reminded all that President Bio, in his address to CoP26 highlighted that impact on Sierra Leone. The Minister maintained that rapid biodiversity and tree cover loss and the attendant threats to human habitat, health, food, and water security are causing other challenges such as increased poverty, gender disparities, and intensified youth unemployment, especially in the COVID-19 era.

The Minister stated that he cannot over-emphasize that the recent Intergovernmental Panel on Climate Change (IPCC) Report confirms that fact despite Africa’s contribution of less than 4% of total emissions.

He pointed out that the report further places Africa’s annual adaptation needs at 86.5 billion US Dollars by 2030 adding that the current mitigation or adaptation measures, while impactful, are not scaling fast enough to counter the effects of climate change.

The Information Minister pointed out that it is, therefore, a belief that we must do more innovatively, leveraging natural and technological means to remove legacy carbon and keep the world on track to keep global warming below 1.5 Degrees.

“I believe we have a consensus: the science, according to the recent IPCC report and the math, points to a logical path of action,” Mohamed Swaray expressed a conviction and suggested that we, developing countries, need increased investment in carbon removal alongside mitigation and adaptation to be led by the global South and supported by developed economies.

The Minister said to that end he would like to applaud the leadership of the Governments of the United States of America with the recent allocation of USD$2.6 billion towards carbon removal.

He also thanked and acknowledged academia led by Thunderbird School of Global Management and other private sector companies for their commitment to that effort.

Mohamed Swaray intimated that it is his conviction that the pathways being explored by that partnership will have immediate benefit to countries involved whether through fairer carbon markets and just technology transfer to countries in the Global South.

He continued that as noted by President Bio, fiscal space is already stretched and therefore requires more support from partners.

“As we proceed to CoP27, we look forward to collaborating with this partnership and in close collaboration with the Governments of Kenya and Colombia to ensure that Carbon Removal remains high on the political agenda,” the Minister concluded.