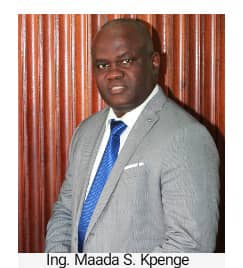 Since Ing. Maada Senessie Kpenge was appointed to head the Guma Valley Water Company (GVWC) a lot of reforms have been instituted with the avowed objective of ensuring that majority of the residents within the Western Area have easy access to clean and pure water supply. Some of those reforms have been accomplished while others are at ongoing implementation stages.

As Managing Director of Guma Valley Water Company, Ing. Maada Senessie Kpenge,  has  efficiently directed the Company’s programs and activities over the past 36 months with the completion of the Freetown Water Supply and Sanitation Master Plan and Investment Studies – the roadmap to achieving 100% water supply access in the Western Area being one of the most important.

In an exclusive interview with the Managing Director, Maada Kpenge, he intimated that his administration’s vision is to increase access to water services, improve on sustainability, protect water catchments and deliver on ongoing strategic projects.

The Guma MD said even though the water supply situation in the Western Area is a challenge because of the demand and supply imbalance; he said the company has taken concrete steps to improve on its daily rationing schedule so that more people will have access to water supply.

Ing. Kpenge said a robust leakage control measure have been undertaken by the Company since 2019 and is ongoing to replace spaghetti connections by laying sub-mains in communities across Freetown so that the distribution networks can retain more water which in turn will lead to more access.

The Managing Director said the Community Services of the Company is operating about 272 Street Taps, 566 Community Tanks, 55 Solar Powered Boreholes and has a fleet of over 20 bowsers to cart water to underserved and unserved communities.

The Guma Chief said a key objective of his administration is to give quality services to customers and improve on the Company’s revenue generation. In this regard, he informed that the Company’s customer base has grown by 8% from 23,498 in 2018 to 25,408 in 2021.

Maada Kpenge disclosed that over the period under review, the Company had undertaken several projects; some of which have been completed. He said during this period, the Government funded Aberdeen – Lumley Beach Road Water Supply Project which restored water supply to Freetown’s most attractive touristic area was completed.

Other projects that have been completed includes the IMATT Community Water Supply Project which is currently benefitting about 20,000 persons resident in the IMATT and Hill Cut Road Bridge communities funded by the Foreign Commonwealth Development Office, the rehabilitation of the Guma Babadorie Treatment Plant at Regent and laying of sub-mains in the Mortormeh to Kaningo communities under the Freetown Emergency Recovery Project funded by the World Bank, and Tombo Water Supply project implemented by UNICEF which will serve over 40,000 population in the fishing village.

Ing. Kpenge also disclosed other community gravity scheme projects such as the Mambo /Hamilton and the Waterloo Water Supply projects which will improve on the access to water supply in these communities are currently ongoing.

On Catchment Protection, Maada Kpenge said the Guma is part of the Inter-Ministerial Committee on Water Catchment, Mangroves and Forest Reserves in the Western Area that was established in January 2020 comprising over 10 MDAs with the Vice President as Chairman.

The Guma MD said the Committee is working on implementing 13 resolutions recently approved by Cabinet all geared towards the sustainable management of the Western Area Catchments and Protected Areas.

The Guma Chief informed how the Company has made tremendous effort to secure some 85% of its facilities across Freetown when it embarked on a massive fencing project in September 2020 as a first step towards bringing water supply to deprived communities.

Fencing of other Guma facilities including the Hill Cut Road Reservoir, Circular Tank adjacent British Council, Break Pressure Tank opposite IPAM at Tower Hill, and Hooke Street Reservoir are either ongoing or about to commence.

Ing. Kpenge disclosed that under the Millennium Challenge Corporation Result Based Financing (RBF) Activity, Guma was able to raise its monthly revenue collection from an average of Le 1.8 billion to Le 2.5 billion. He added that the Company was also able to lay 11.5km of pipe line of various sizes to replace the numerous spaghetti pipes that are causing huge wastages for the company; 897 saddle connections were done and 1,710 leakages were repaired.

Guma received rapturous commendations from Ndeye Koroma the then Chief Executive Officer of the Millennium Challenge Coordination Unit (MCCU) for its brilliant performance during the RBF program and the Threshold Program as a whole.

“We have been able to improve the financial viability and operational efficiency of Guma; we have also been able to successfully implement the RBF activity with Guma that has seen it perform above the target set for it. This is not something the MCCU did, this was an achievement by Guma itself because it had good leadership in place”.

The incentive received from the RBF Scheme is being utilized by the company to improve on its commercial and engineering operational efficiency in line with the Company’s capacity building programs.

Maada Kpenge disclosed that the Company launched a Le 1 billion Staff Welfare Loan Scheme in November 2020, from which many staff from all cadres benefitted to solve their domestic and personal issues. This is a first in the company’s history and is serving as a motivation for positive staff performance.

He went on to state that under his watch, the Company is now leveraging ICT and has acquired 28 new vehicles and rehabilitated 13 old ones.

On the strategy to achieving 100% access to water services in the Western Area, Ing. Kpenge said the focus will still be on reducing Non-Revenue Water by extension of sub-mains and removal of spaghetti service pipelines, water conservation with metering and implementation of the Freetown Water Supply and Sanitation Master Plan and Investment Studies roadmap.

Maada Kpenge thanked the Government and the Board of Directors of Guma for their strategic oversight, the Management and staff for the resilient support in addressing the challenging water supply situation in the Western Area.

No Room for Land Grabbers As… Guma Safeguards Facilities Via Fencing