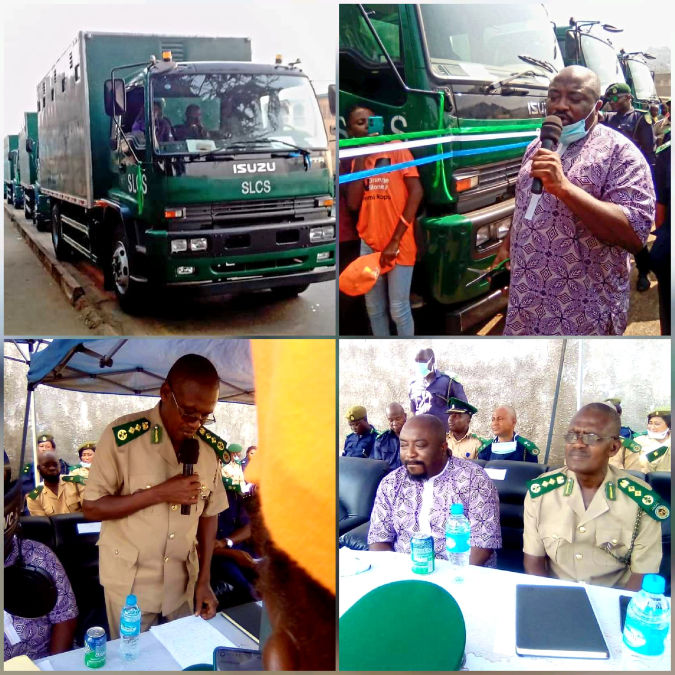 After the 29th April 2020 attempted jail break at the Male Correctional Centre on Pa Demba Road in Freetown, a thorough security assessment on Prisons country wide was conducted to determine existential threats and loopholes with regards those incarceration centres. Lack of mobility was identified as a key capability shortfall.

It was against such a backdrop that the Sierra Leone Correctional Service requested that Government must facilitate the provision of assorted vehicles to improve on the operational capacities and functions of prison personnel nation-wide.

In response, the Government of Sierra Leone through the Ministry of Internal Affairs recently provided 22 vehicles which include: three ambulances, six Hilux, two Prado vehicles and eleven trucks.

The Minister of Internal Affairs, Panda Noah, while officially unveiling the aforementioned vehicles, stated that Government is aware of the numerous challenges that the Sierra Leone Correctional Centre (SLCC) is facing which, according to him, was why in 2020, His Excellency President Julius Maada Bio ordered that a Managerial assessment review of the SLCC be undertaken.

He furthered that the Julius Maada Bio led-Government is really committed in building trust between the citizenry and the security sector.

The Minister added how the Government is focused on enhancing professionalism and de- politicising the forces in the country for effective service delivery.

Hon. Panda Noah assured that the Government is taking deliberate and practical steps to de- congest the Correctional Centre and instituting modern reforms.

The Director General of the Sierra Leone Correctional Service, Joseph Lamboi, expressed his excitement over the new development adding that the transportation challenge which has plagued the department or Correctional Centres for so long has been somehow ameliorated.

He continued by saying he is grateful to the Government of Sierra Leone for the gesture which, he said, the Sierra Leone Correctional Service had been yearning for.

“This invaluable support is not only going to make our job easier but it will also bring value to the department in the midst of our sister forces,” he stated.

The climax of the occasion was cutting of the ribbon signifying the official handing over of the vehicles to the Management of the Correctional Centre which was followed by a convoy parade.