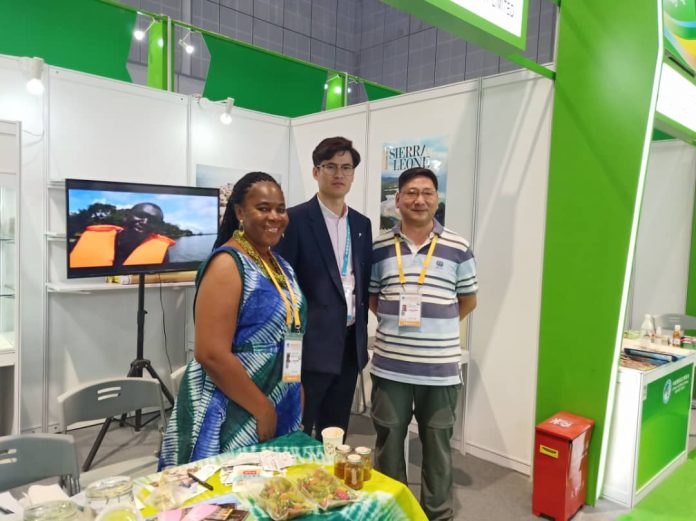 Among few African countries that joined the second China International Import Expo was Sierra Leone, which was very enthusiastic to participate as a means of attracting investors for the country.

Sierra Leone participation was made possible through the Sierra Leone Trade Investment Development Limited whose head is the Special Envoy for Trade and Investment Mr Wong.

The second China International Import Expo was held at the National Exhibition and Convention Center in Shanghai from the 5th to 10th November, 2019 and was organised and supported by Ministry of Commerce of the People’s Republic of China, CIIE 2019.

Madam Kowa explained that their purpose of participating in that expo was to showcase Sierra Leone investment opportunities and for investors to show interest to invest in the country.

She said the Expo was all about Agriculture but they also showcase the mining industry as a possible area to invest.  She pointed out that such Expo is good for the country as they met investors from around the world that participated in the event.

“For a nation of about 7 Million to found herself in that Expo, it means a lot for us,” she stated.

She commended Sierra Leone Trade Investment Development Limited for taking the bold step for Sierra Leone to participate in such a forum as they too are investors that are not only here to invest but to bring more investors into the country.

Madam Kowa went on to say during their interaction with other foreign investors at the expo, they also marketed Sierra Leone Tourism potential and the Atlantic Lumley Hotel as one of the prestigious hotels in the country.

She said from their interactions, they are very sure more investors will start jetting into the country, which she added will help to boost the economy.