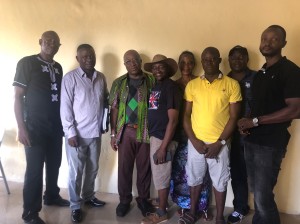 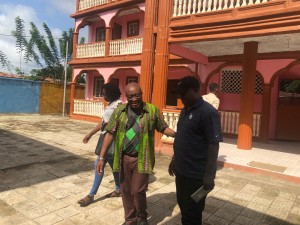 The Deputy Vice-Chancellor and Principal of the Institute of Public Administration and Management (IPAM), University of Sierra Leone, Professor Samuel E.B Nonie over the weekend revealed to the people of the Northern region via Radio Hope F.M 93.3 in Makeni that the institution is very much concern about the massive failure in the last West African Senior School Certificate Examination (WASSCE); more especially the poor performances in Maths and Language Arts.

“As a forward-looking institution we have decided to implement a new  programme to address the massive failure in Maths and Language Arts exams,” he pointed out. He said that their focus is to fulfil President Bio’s agenda to achieve quality education in the country.

He disclosed that they have done a survey on the WASSCE and seen the  need for their timely intervention.

The pro-active Professor disclosed that they are on course in rolling out massive developmental activities in all IPAM campuses; Bo, Kenema, Kono and Makeni, mainly to address the issue of examination failures in the WASSCE. He said they will recruit  the most qualified and experienced teachers in English and Maths to prepare WASSCE students.

The Professor intimated how they are introducing the programme for those that have passed most of their subjects but did not do well in both Maths and English.

“We are taking education to your door steps which is one of the pillars in our administration,”, he underscored.

Professor Nonie further disclosed that the mass failure is a big concern to IPAM’s administration adding how a problem in one area or one sector of the country is a problem for all.

“We as parents need to help our children to have better education so that  they can in the future contribute to the development of the country,” he said assuring that IPAM will continue in that direction.  Professor Nonie asserted that the programme is not just like a syndicate but will focus on areas where  students have problems in.

He said they will bring teachers from Freetown to help the already  experienced  and dedicated lecturers in the provinces.

He emphasised  that this new IPAM model will focus on IPAM provincial campuses because pupils in Freetown have the advantage of accessing several good syndicates which the provinces do not have. Professor Nonie noted that IPAM will help to cater for the provinces because they want to take quality education to all the districts in the country.

At the end of the program residents from various walks of life expressed thanks and appreciation to Professor Nonie and team for coming up with such a learning model that will benefit residents of Makeni.

One of the key stakeholders, Abdul Rahman Sesay, maintained that this is the biggest intervention IPAM has decided to implement in that part of the country as a way to help parents develop their children’s learning abilities at such a time when parents are really frustrated with the recent deplorable results.

Section Chief, Pa Alimamy Osman of Masorie Town, expressed their happiness for such a model to commence in the Northern region.

“We will always be grateful to IPAM for this,” said Pa Alimamy adding how they have been having  problems with sending their children to relatives in Freetown to seat to the private WASSCE.

Director of Strategic Planning and Quality Assurance, University of Sierra Leone, Mr.David Gbao, revealed  that not only in Sierra Leone but in Africa at large, most times quality services and products provide optimal customer satisfaction.

“Our office is here to support what the Professor is doing to ensure quality assurance with regards high value academic content which the University is  delivering,” he said.

Margret Sheriff Bangura,  Coordinator for IPAM in Makeni, assured the people of Makeni about their preparedness to  deliver quality education during the next academic year.

The delegation which was headed by the Vice Chancellor of IPAM after the radio programme  went on a conducted tour to see the new facilities of IPAM in Makeni.