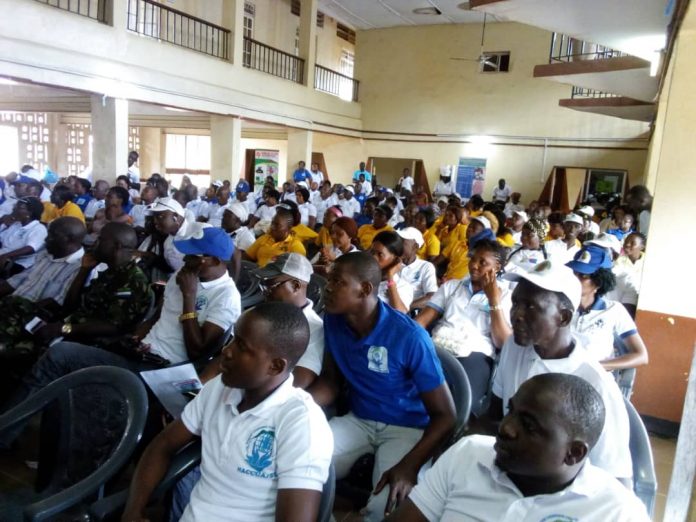 Mr. Solomon Mwongyere, the General Manager of the Irish League Credit Union (ILCUs) Ltd, has stated on the third celebration of the International Cooperative Credit Union Day (ICCUD) in Sierra Leone that they are working with 28 Credit Unions with a total membership of 9,264 (62% female) adding that these members have saved Le5, 700,000,000, have Le1, 000,000,000 in shares and have a total loan portfolio of Le6, 700,000,000 but lamented that Sierra Leone lacks a savings culture.

He made the statement at the celebration of the third International Cooperative Credit Union Day to be observed in Sierra Leone at the Young Women’s Christian Association hall, Brookfields in Freetown on the theme ‘Strength and Stability.’

Mr. Solomon Mwongyere also informed that with low savings culture in Sierra Leone, Credit Union members have tried to save little by little which have made their savings grow adding that this gives them an advantage of Le615, 000 per Credit Union member and disclosed that globally, Credit Unions are in 117 countries with a total membership of 260 million people.

He asserted that as Sierra Leone joins the rest of the world to celebrate the day, “we are celebrating the contributions of Credit Unions to their members” and underscored that the Irish League Credit Union (ILCU) is proud to associate and support the work of Credit Union movements in Sierra Leone adding that at ILCU, they educate, enable and empower people to help themselves.

According to the ILCU General Manager, they are using the Credit Union model to promote financial inclusion, which helps to reduce poverty as well as boost prosperity and continued that they believe in credit union principles and philosophy of people helping people, cooperation among cooperatives and promoting the welfare of credit union communities underscoring that the day was to celebrate the successes credit union members have derived from the services and products offered to them.

He reiterated that through Credit Unions, members have been able to send their children to schools and colleges, improve their farms, start businesses, build houses and create employment revealing that Credit Unions are employing 41 staff directly and expressed thanks and appreciation to the Irish Aid and Credit Unions in Ireland for accepting to fund their three years project titled ‘Financial Inclusion for Resilience in Sierra Leone’ that would enable ILCU reach 13,000 members by 2021.

Mr. Solomon Mwongyere said for the first time Credit Unions have started using technology to generate reports intimating that 6 Credit Unions have so far been trained and received computers, generators and solar panels while others have received motorbikes and other equipment that have enabled them to effectively serve their members and underlined that Credit Unions must support communities in which they operate and give loans to credible people.

He warned Credit Union Leaders and staff that sound governance of Credit Unions is essential, that they must connect and stay loyal to their members, build relationships with community organisations, support their communities through corporate social responsibility, be prudent in their lending, give loans to members who qualify and ensure that those loans are recovered reminding leaders that they must connect and respect their members as the Unions cannot exist without members as well as build relationships with communities as they cannot work in isolation.

Concluding, the ILCU General Manager commended the Ministry of Trade and Industry, the Bank of Sierra Leone, their bankers, the National Cooperatives and Credit Union Association (NACCUA) leadership, Credit Union Leaders, members and staff for their support and collaboration.

Among the challenges he highlighted affecting Credit Unions are the obsolete 1977 Act, called on the Cooperative Department and the Ministry of Trade and Industry to review it, repayment of loans but noted that they are working with partners to formulate policies to overcome the challenges and acclaimed all for their support to Credit Unions in Sierra Leone.

The Registrar of Cooperatives, Mr. Newton Marlin revealed that the Department has its own Credit Unions and disclosed plans to extend the course on Cooperative and Rural Development Studies to Njala and other universities lamenting that loan delinquency is a major concern for which he vowed to hound defaulters affirming that there would be no more business as usual.

Other dignitaries who made statements included the representatives of the Bank of Sierra Leone and the Irish Ambassador in Sierra Leone, Mary O’Neil who disclosed that Credit Unions in Ireland are 62 years old and urged all to implement good management and discipline in taking decisions as to those qualified to be granted loans and wished them well.

Highlights of the ceremony were a video show and drama performance on the advantages of Credit Unions, entertainment by students and Bayconsfield Vocational Institute, testimonies from members who have benefited immensely from Credit Unions and presentation of awards to renowned Credit Unions while Victoria Pratt rendered the vote of thanks.