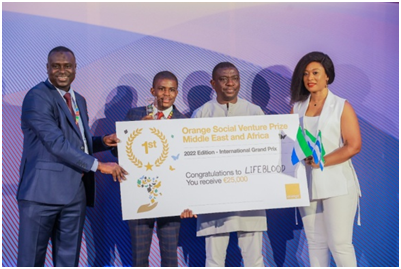 Seventeen (17) countries where Orange Group is operating in both Africa and in the Middle East participated in the 2022 edition of OSVP in which Orange (SL) finalist clinched the first international grand prize award.

Life Blood Sierra Leone is a digital health platform designed to address the problem of acute shortage of blood products in the country’s healthcare delivery system.

The system is designed to, among other things to increase public awareness about safe blood services, increase the level of voluntary blood donation in the country with an improved facility to administer blood transfusion as well as National Safe Blood Service.

Joseph Koroma who was one of the eight finalists who contested in the National category general prize award of (Old Note) Le100,000, 000.00 in September this year.

In an exclusive interview, Joseph said: “In my country, mortality rate is high and the main factor is the limited availability of blood banks. So I am hoping that this project will address the problem of acute shortage of blood in the country’s health care system.,”

It must be underscored that at the national level, Orange Sierra Leone has been organizing the Orange Social Venture Prize (OSVP) competition.

The 4th Edition was held on the 1st September 2022 in which eight (8) finalists participated for a whooping sum of One Hundred and Fifty Million Leones (Le150M).

According to the Head of Public Relations at Orange SL, Annie Wonnie Katta, Orange is positioned to be the lead digital partner for startups in Africa and the Middle East. This is why Orange Middle East & Africa (OMEA) initiated OSVP some 12 years ago to reward the best technological projects with positive impact and solution to social challenges mainly in the area of education, health, agriculture, mobile payments or sustainable development in Africa and the Middle East. 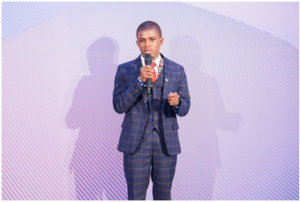 Xi told Biden Taiwan is First Red Line that Must not...