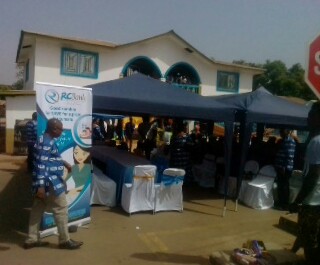 Residents of Kabala in the Koinadugu District received their New Year’s gift from the Rokel Commercial Bank where a new branch of the bank was commissioned during an auspicious occasion. The opening of a new branch some say has brought relief to residents in that part of the country as that will greatly help them to conduct banking transactions.

The new branch, just few meters away from the town center will provide full banking services to residents and visitors and as the Managing Director, Dr Dayo Gilpin puts it, “We were here before as Barclays Bank from 1984 but the war stopped our operations….. We resumed with mobile banking and today we are here with a permanent outfit…..”

Dr Gilpin was optimistic that the Kabala new branch would significantly promote financial inclusion as products like the Rokel Simkorpor will not only take banking to the doorsteps of indigenes but will also enhance economic growth in the district.

It was clear the new Rokel Bank branch in Kabala enjoys the endorsement of the district’s stakeholders as according to the Chairman of the Koinadugu District Council, Alex Sorie Conteh, most Government employees in the district have their accounts with Rokel Bank thus the opening of the  new branch was long overdue. “Agriculture is the mainstay of our district and we understand that Rokel Commercial Bank supports agriculture and this is a huge blessing to the people of Koinadugu” he said.