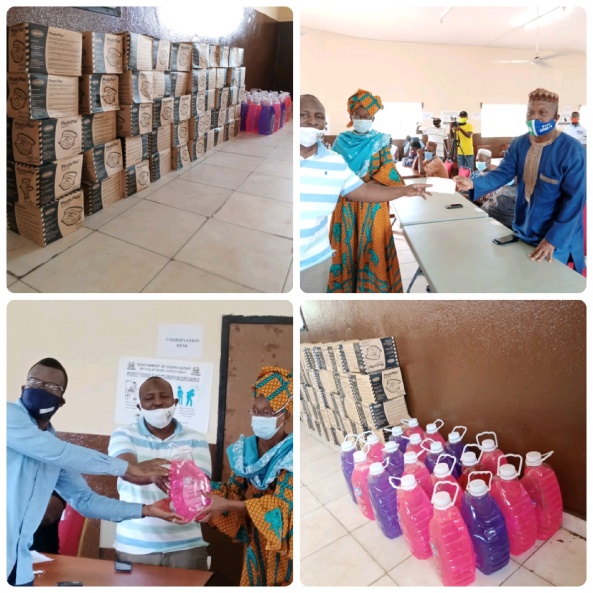 Continuing his nationwide humanitarian gestures, which started weeks back, by providing financial and material supports in order to help curtail the spread of the coronavirus, unprecedented moves that have been widely acclaimed, , the charismatic, result-oriented Chief Executive Officer of Pavi Fort Road Construction Company, Alimou Barrie and team on Sunday 21st June 2020 were in Kambia and Tonkolili Districts to dole out various humane donations.

It brought together the Paramount Chiefs of the 10 chiefdoms, the Resident Minister, North West, Haja Isata Abdulai Kamara Fofanah, the Sierra Leone Ambassador to Guinea, Amb. Alimamy Bangura, the District Medical Officer of the district, Dr. Sylvanus Bangura the Coordinator of Kambia DICORVERC Office, Mohammed Dumbuya, DICORVERC Officials  and some residents of the district.

The Pavi Fort CEO and team handed over a cheque of 20 million Leones, medical items including 2,500 face masks, 100 bags of rice and 25 gallons of hand sanitizers totalling 100 million Leones.

According to the Chief Executive Officer, Pavi Fort- Sierra Leone, Alimou Barrie, out of the total amount donated the 10 million Leones cheque, 70 bags of rice, 25 gallons of hand sanitizers and  2, 500 face masks were meant for the Kambia DICORVERC to break the chain of transmission of the virus.

He furthered that the 10 chiefdoms in the district will also benefit out of the balance 10 million Leones cheque and 30 bags of rice to fight the disease by stakeholders in the respective communities in that part of the country.

Receiving the cheque and the items on behalf of the district, the Regional Coordinator, who also doubles as the Resident Minister North West, Haja Isata Kamara Fofanah, thanked and commended Alimu Barrie for the support further stating that what he has so far provided for the district will go a long way to support the fight against the disease.

Speaker after speaker, including the Paramount Chief Member of Parliament of Magbema Chiefdom, P. C Bai Farama Tass Gbubu N’gbak 1V, expressed gratefulness for the support provided by Pavi Fort underscoring how they as local authorities were really constrained with logistics to contain the spread of COVID-19 in their respective communities.

The Chief talked about the challenges they are faced with in the fight against the disease in the district.

The Sierra Leone Ambassador to Guinea, Alimamy Bangura and the Coordinator of the Kambia DICORVERC, Mohammed Dumbuya, dilated on the impacts that the support will make to help fight COVID- 19 in the district. They said the support came at the right time as Kambia has recorded 25 positive corona cases.

The Kambia District Medical Officer, Dr. Sylvanus Bangura spoke about how the support would be utilized to combat the disease. He updated the gathering on the current state of COVID-19 in the district informing how the district is becoming a hot spot for the disease.

In his brief address, the CEO of Pavi Fort Road Construction Company, Alimu Barrie, pointed out that the aid formed part of his moves to give support to all the 16 districts in the country.

During the donation ceremony, which took place at the Ernest Bai Koroma University of Science and Technology in Magburuka Town, CEO Alimou Barrie disclosed how the support he had been and is still rendering is geared towards helping the Government in its fight against the spread of the corona virus within the Tonkolili district.

“In the area of enhancing social mobilization of traditional authorities within the district the company is also offering a 10 million Leones cheque and 30 bags of rice to combat the disease in the district,” Alimou Barrie stated.

The Resident Minister, North West, Abu Abu Koroma commended Alimou Barrie for the support and    called on the Government to support Sierra Leoneans like Alimou Barrie who has the country at heart in times of crisis.

Statements were also made at the event by the Paramount Chief of Kholifa Rowala Chiefdom, P.C. Masakama Kanamanka 111, other Government officials and the Coordinator of the Tonkolili DICORVERC, Alusine Abdulai Sesay.

Coordinator Alusine Abdulai Sesay stated that the donation from the company is the biggest assistance they have so far received from a private company following the outbreak of the disease in the country.

Also, as part of his goodwill gesture to the people of Kaffu Bullom Chiefdom, Lungi, CEO Barrie, handed over a 10 million Leones cheque,  2.5 million Leones cash, 50 bags of rice, 2,000 face masks worth 70 million Leones  as social mobilization support to contain the spread of the disease in that part of the country.

In another development, the Chief Executive Officer of Pavi Fort, Alimou Barrie on Saturday 13th June 2020, donated bags of rice, cash and Personal Protective Equipments worth millions of Leones, as well as a cheque to the Karene District Emergency Operational Centre (DICOVERC) through the Minister of Health and Sanitation, Dr. Alpha Wurie. This venture was made in the direction of scaling up the fight against the spread of the coronavirus in Karene District and considered as a good will gesture to complement the efforts of the Government and to aid the people of Karene District.

Alimou Barrie presented a cheque of Twenty Million Leones (Le20, 000,000), 80 bags of rice, 30 gallons of sanitizers and 5000 face masks to the District COVID-19 Emergency Response Centre (DICOVERC) at Gbintie Town in Karene District. He clarified that the donation including cash, medical items and 80 bags of rice (50 kgs) worth 110 million Leones were meant to facilitate the fight against the corona virus within their respective chiefdoms in the district.

It is on record that Pavi Fort Construction Company has stood by the side of the Government of Sierra Leone during trying times, as it did on August 14th 2017 when the disastrous mudslide occurred at Regent. The company was among those that donated relief items, which included five hundred bags of rice, Le25 million Leones and provided three excavators to clear the rubble and also built fifty two (52) houses at 6 Mile to address the housing problems faced by the victims in the aftermath of the mudslide incident. 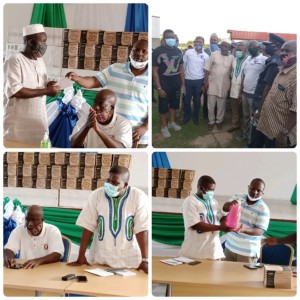 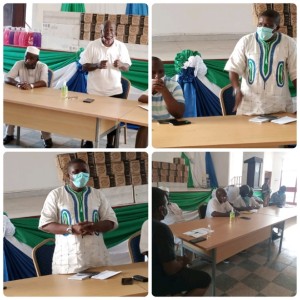 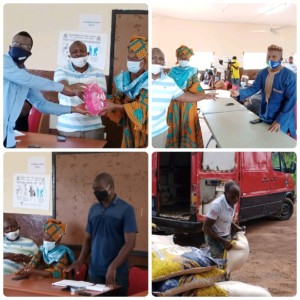