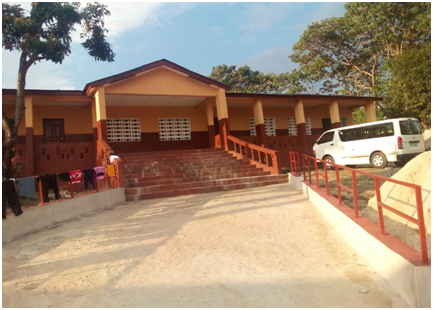 Koidu Limited, one of the biggest mining companies in Kono District, is almost completing the rehabilitation of the erstwhile neglected Kono Blind School in Koidu Town.

Principal of the Kono Blind School, Philip Deen Sesay, intimated this news medium that the school for the visually impaired pupils in Kono District was established way back on the 6th September 1988, 35 years ago.

He continued that the school has survived because of the Government’s quarterly subvention but lamented that it sometimes takes the school’s administration about 6 to 7 months without getting that subvention from the central Government.

The Principal furthered that a philanthropist and a son of Kono, one  Ibrahim Turay, made a commitment that Koidu Limited, under which he is working, would step in to fully salvage the state in which the school was, especially the dilapidated school building which was not properly built under the Sababu Education Project.

He confirmed that the first consignment or gesture which was extended to the Management of the school by Koidu Limited was Seventy Million Leones (Le70M) through  an organization known as  Kono Lives Foundation.

Mr. Sesay, who attended the Milton Margai School for the Blind in Freetown, said during the ceremony  which marked the handing over of the Le70M to the blind school, the Management of Koidu Limited also used the occasion to commit themselves that they would step in full force to rehabilitate the dilapidated school which was about to collapse.

“But with the timely intervention of Koidu Limited which conducted feasibility studies of the school observed that the building has become dilapidated and if urgent action was not instituted, it might fall down and cause untold damage,” he told this medium and continued that in May this year, Koidu Limited commenced or started a massive construction and rehabilitation work on the school.

He expressed gratitude and commended the Management of the company for even building a quarter for him and his family members to reside. The Principal compared the renovated school to a college.

He frowned at people who are still thinking that the blind or visually impaired people are less useful in society underscoring that there is no need to neglect this class of people in society  stressing that, “There is ability in disability” and lamented how the school properties were carted away by heartless people because there was no better school structure and storage facility to properly protect the school materials.

He said the contractors of the school building had completed the rehabilitation of the school and they are now constructing the boys and girls quarters to fully make the Boarding Home functional.

The Principal further bemoaned that the pupils are supposed to eat three times a day but the prevailing hike in the prices of food and essential commodities had limited the children to eat only two times a day.

He informed that the total number of blind pupils in the school is 72, noting that the school administration spends  One Hundred and Forty Thousand Old Leones (Le 140, 000) every single day on feeding and a bag of rice lasts only for two days. He emphasized on the uneasiness involved in running a Boarding Home.

On the issue of salary for teachers, Mr. Sesay explained that the school has six (6) voluntary teachers who are not on the payroll and four teachers including himself who are on payroll.

He further intimated how the school is facing too many constraints, including the lack sufficient food to satisfy the children and the absolute lack of teaching and Braille materials across all the blind schools in the country.

Mr. Sesay stated that braille teaching materials were not for sale in Africa except that they are ordered for or imported from either United Kingdom, America and beyond.

Sesay said  as we are  now living in a digital world, the blind school needs typewriters no more but  is interested to have more computers so that the children would be able to compete with their counterparts as they are integrated in secondary schools.

Sesay expressed gratitude to a humanitarian organization known as Sustain For Life to approve their project which aided them greatly to secure about twelve (12) computers and one printer.

He also expressed gratefulness to the Management of Koidu Limited stating that the issue of rehabilitating the blind school was not part of the company’s mandate but they stepped in as a mining company to support the course of serving humanity, especially when the project had to do with the educational development of the visually impaired.

He prayed for the management to continue actualizing the promised to give more strength to the school feeding program so that the poor children will continue to eat three times a day as usual by January 2023.

Mr. Sesay recalled that last year, the SLPP led Government of Sierra Leone supported the school with its quarterly subvention for the whole year which they used not only to pay salaries of academic and supported staff like the cooks, drivers, cleaners and among others, but they also used part of the subvention to pay salaries to the six voluntary teachers.

Mr. Sesay clarified that the subvention which was sent last year has been exhausted or spent because the said subvention in the tune of Thirty One Million Leones (Le 31M) was not enough to run a whole learning institution throughout the year. He cited the general increase in the prices of basic commodities.

In that regard, the Principal humbly appealed to the Government to increase subventions to all blind schools across the country for  their smooth operation.

Octea Mining Company in the Spotlight