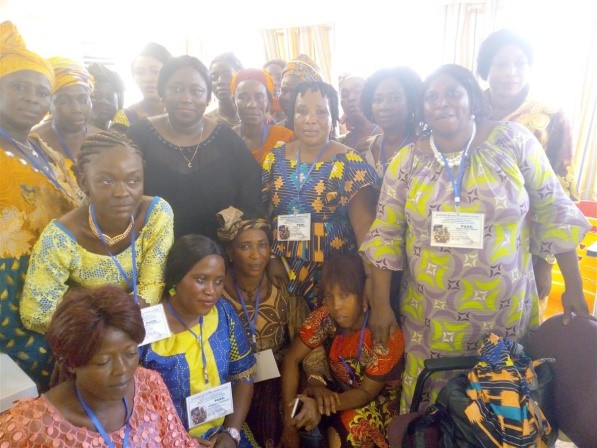 Ms. Fatmata Claire Carlton-Hanciles, Executive Director of the Legal Aid Board, informed representatives of Widows Network-Sierra Leone from around the country who paid a courtesy call on her at the head office of the Legal Aid Board in Freetown that she is both sorry for and angry at what some of them have gone through in the hands of male relatives of their deceased husbands.

“These male relatives are selfishly dispossessing you of properties belonging to you and your late husbands in the name of customs and traditions,” she said, adding: “This is wrong and heartless because our customs and traditions are rooted in fairness, compassion and justice.  The good news is, this will never happen to those coming after you.”

She called on the women to sensitize their members who find themselves in this situation to come forward and report such matters to the Board so that property grabbed from them could be recovered. She drew attention to a particular case in Bo in which the Board ensured that two widows were given back their late husband’s house after they were forced out by male family members following the death of their husband.

Ms. Carlton-Hanciles assured widows that the Board will adopt a pro-active approach in dealing with this problem. This means the Board will no longer wait for widows to lodge a complaint at the Board instead Paralegals will visit wherever there is a funeral to find out whether widows have any problems relating to inheritance in the future. She added that they will meet with the widow(s) and sensitize them on issues of inheritance and will inform them that they are available in case they encounter problems particularly with male relatives regarding property left behind by their deceased husbands. “The reason for this is that, most times widows are not bold enough to come forward or seek redress when they are confronted with such problems,” she said.

She assured the widows that she will be sending the National Supervisor for the Board, Mr. Mohamed Korie round the country to meet with members of the Network, Local Court Administrators, Paramount Chiefs and other administrators of the Informal Courts in their respective districts to educate them on this issue.

She disclosed that the operations of the Board have been boosted by funding from the MOTT Foundation which focuses on improving access to justice in remote communities through the provision of primary justice services.  “With support from the MOTT Foundation, we have been able to deploy Paralegals at chiefdom level and more importantly in the two newly created districts and this is happening for the first time,” she said.

In another development, on 6 February 2020, the Sierra Leone Legal Aid Board and the Ministry of Youth Affairs (MOYA) in collaboration with the Henriatta Mbawah Foundation and Diamond Line Multimedia Entertainment Company concluded a one-day awareness-raising meeting with 432 clique leaders (commonly called Five O’s), youth leaders, village heads and Tribal Heads in the Western Area under the theme: ‘Misuse of Drugs; Alcohol and other Prohibited Drugs Must Stop Now’.

The Executive Director of the Legal Aid Board, Ms. Fatmata Claire Carlton-Hanciles who spearheaded the meeting delved into the relationship between drug abuse and crime and how this has ruined the lives of particularly young people and moreover landed some in jail.

She noted that the Board has been working with National HIV/AIDS Secretariat, Women in Crisis Movement – Sierra Leone, Society for Women and Aids in Africa (SWAASL), Dignity Association and Social Linkages for Youth Development and Child Link (SLYDCL) to protect the rights of the key population which comprise Men Having Sex with Men, Female Sex Workers and People Injecting Drugs.

Ms. Carlton-Hanciles drew attention to the misuse of youths by politicians in particular. She expressed concern at the fact that youths who were hanging around the APC head office when the party was in power have moved to the SLPP headquarters now that the SLPP party is in power. She warned against youths who prefer being idle to finding something to do. She also warned the youths spending all their time in ghettos and Ataya Bases. “Those of you who use larceny for a living are not a priority to the Legal Aid Board in terms of legal assistance,” she warned.

She expressed concern at the fact that drug abuse in Freetown and Waterloo is far bigger than anywhere else in the country. She called on the cliques groups ‘Friends of The Dead’, ‘Black Street’, ‘Red and Blue Flags’, ‘Soja Team’ to do something about it.

She said that the Board is over-stretch and therefore cannot provide legal assistance to youths who engage in drug fuelled violence. “We have 10 inmates at the Pademba Road Correctional Center who killed their relatives under the influence of drugs,” she said.

Ms. Carlton-Hanciles encouraged the youths to take advantage of programmes which are being implemented by the Ministry of Youths and other agencies which are geared towards empowering them to acquire skills and knowledge that will give them a sustainable livelihood.  She warned those perpetuating violence against Female Sex Workers that they will face the consequences of their actions. She called on the Female Sex Workers to report all such violence against them to the Police.

On his part, the Deputy Minister of Youth Affairs, Mr. Luseni Kallon called on youths to consider themselves as leaders of today and not tomorrow and therefore take their responsibilities to nation building seriously. “If you continue to misuse drugs, you will be a bad example,” he said.

He urged the youths not to allow themselves to be haunted by their ugly past. He added that as a youth he was influenced by friends to do bad things but was able to turn his life around and contribute to society.

He warned the youths that drugs will not provide any solution to their problems; instead it will only worsen their situation and lead them to do bad things and commit crime which will land them in jail.  He assured all that the Government is committed to fighting poverty, lawlessness and corruption. He appealed to the media to focus on development oriented news.

The Deputy Commissioner of the National Youth Commission, Mr. Emerson Kamara said the Commission will continue to provide opportunities for youths which will change their lives for the better. “The opportunities are available now, you have to decide the future you want for yourselves and the choice is yours,” he said.

He said that bad and unproductive youths are far less than the productive ones in terms of numbers. “We will provide the opportunity to those who want to make it in life.”

He added that the Commission distributed 100 bushels of rice each to youths in Makeni, Kambia and other parts of the country which he maintained has changed their lives.

He reminded the youths that they have a responsibility to change the country noting this is something they have to treat with all seriousness. He added that some cliques have left their home communities to cause problems in other communities where they are not known.

He promised that the Commission will work with the Police to stop arresting people for loitering, frequenting, traffic and other minor offences because it does not make any positive difference in the lives of young people.

He disclosed that the Commission will help 1000 young people get jobs in road works with the company that will be constructing the Bandajuma highway. “If you do not want to take advantage of these opportunities and change your live, what do you expect us to do?” he asked.

He revealed that apart from using ‘pampas’, the youths have again discovered a new drug which is grey hair of humans. Mr. Kamara recalled that the use of ‘pampas’ as a drug in Sierra Leone started in Kabala where some Chinese working in the timber industry gave it to laborers to mitigate the cold weather in that part of the country.  He said those taking pampas stand the risk of dying in six month.

He called for a shift in strategy in the campaign against drug abuse by adopting a harm reduction approach. This should involve giving condoms to Female Sex Workers and syringes to those injecting drugs.

He argued that there should be change in the law so that money spent on drug abusers could be better spent on harm reduction strategy. He called on the authorities for a new law on alcohol, stating that the current law can no longer stand the test of time.

The representative of the National HIV/.AIDS Secretariat, Mr. Kemoh Sesay said People Injecting Drugs, Men Having Sex With Men and Female Sex Workers are at most risk of contracting the HIV virus.

Henrietta Mbawah of the Henrietta Mbawah Foundation drew attention to the struggles ‘legal hustlers’ go through in the country and called for their protection as well noting they too struggle a lot. “There is no struggle without a story,” she said.

The meeting was climaxed with the launch of the movie “Crips Town” by the Executive Director of the Board and Deputy Minister of Youth Affairs. This was followed by showing of the film which depicts the struggles and abuses female sex worker and drug addicts go through on a daily basis as they try to make ends meet.

Earlier, the chairman of the meeting, Lawyer Francis Gabiddon who also doubles as Consultant to the Board spoke on the need for law enforcement agencies especially the Police to discuss with legal experts issues relating to the prosecution of people who misuse and abuse diapers locally known as ‘pampas’. Lawyer Gabiddon opined that since there is no law against the abuse of pampas, the Police could be acting outside the law by arresting those using them as drug. 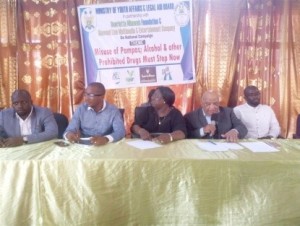