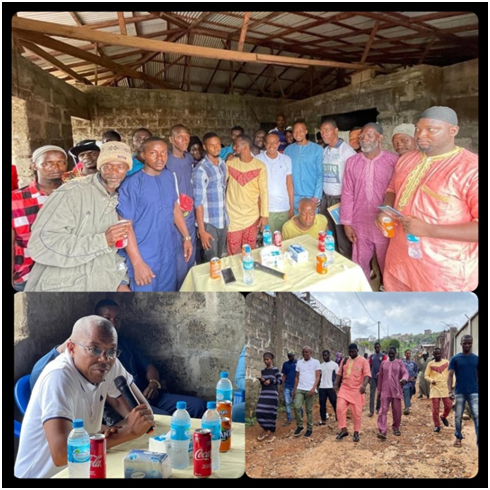 In honor of an invitation sent by the Fullah Community within the Malama Community in the West End of Freetown via a young but vibrant youth Fullah progressive organization known as Haldi Forti Haali Poular ,the Minister of Lands, Housing and Country Planning, Dr. Turad Senesie paid a visit over the weekend.

At Songa Drive, the Minister was treated to a grand welcome by community elders including traditional and religious leaders, who expressed appreciation over the visit of the Government representative.

During a Community Engagement which was attended by dozens of Fullahs from various vocations ranging from bike riding to international business ventures, the Fullah Community praised the Minister for his solid leadership at the Ministry which, they claimed, has ushered in several reforms in the sector over a short period of time.

He was urged to continue in such a professional and patriotic direction for the progress of the country.

An executive representative of Haldi Forti Haali Poular, Alhaji Muhammad Jalloh, intimated how the organization was formed to seek the welfare of the Fullahs and facilitate various community development projects, while inviting the Minister to serve as a mentor and godfather for the young men and women in the community.

In response, the Minister of Lands, Housing and Country Planning, Dr. Turad Senesie expressed delight for being in the midst of members of the Fullah community, whom he described as one of the most organized and respected tribes in not only Sierra Leone but West Africa as a whole.

“The Fullah people deserve to be respected by all and sundry as the tribesmen continue to demonstrate how much they love and respect themselves,” he noted.

He used the forum as an opportunity to re-echo that the SLPP is the only party that has and will continue to demonstrate the well deserved respect it has for the Fullah Community as evident in the election of Dr. Juldeh Jalloh as Vice President of the Republic of Sierra Leone.

“The SLPP is the only political party that has placed the Fullahs in the second highest office in the land,” he pointed out, noting further that Dr. Jalloh has acted as President on countless occasions.

He further used the opportunity to educate the populace on the successes and challenges of the Maada Bio led Government of Sierra Leone, while calling on the Fullahs to continue to support the Government for the prosperity of the country.

The Minister urged the Fullah Community to trust the process, while disclosing that Sierra Leone is lucky to have a patriotic, passionate and focused leader at a time like this when the world is going through hardship.

He assured the Fullah Community that he will always be happy to associate with them as he is a firm believer of the SLPP’s one people one country ideology.

At the event, the Hon. Minister made a surprise financial donation of an undisclosed amount to the organization, which the organizers and community people appreciated so much.