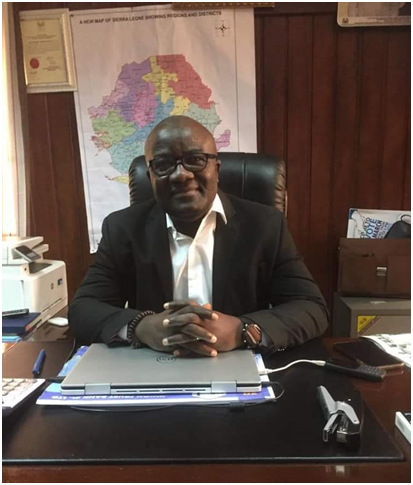 The Chief Electoral Commissioner continued how the information he is requesting for and requiring is for the review of electoral boundaries concluding that whilst awaiting a response he is giving assurances of the Commission’s highest esteem.

In another development, the leader of Government Business in Parliament, Hon Mathew Sahr Nyuma in a correspondence dated 5th June 2022  and captioned, “RE: Use of 2021 Mid –Term Housing and Population Census Data and Introduction of Proportional Representation System for the June 2023 Elections Will Not Be in the National Interest to the Chief Electoral Commissioner and Chairman Electoral Commission of Sierra Leone”, directed or addressed to the Chief Electoral Commissioner, stated that it is with grave concern that he writes to draw his attention to the above subject, more particularly to the reference to the Parliamentary procedure for giving legislative effect to the statutory instrument for the Mid Term Census.

He again maintained that also under reference is the unsubstantiated claim by the Leader of the main Opposition APC Party in Parliament that the process was illegal.

The Leader of Government Business intimated that for the integrity of Parliamentary process and Parliament he wishes to make following clarifications.

First, that it is erroneous to claim that the Proclamation for the Mid-Term Census was not properly laid before Parliament.

According to him, Subsection (7) of Section 170 of the Constitution of Sierra Leone 1991 (Act No. 6 of 1991) is clear and unequivocal adding how as a statutory instrument, so long as it has been properly gazetted, it matures into law and takes effect as such 21 days after it has been laid before Parliament unless sooner annulled by a vote of two-thirds majority of the Members of Parliament.

He argued that the Subsection reads: “Any orders, rules and regulations made by any person or authority pursuant to the powers conferred in that behalf by this Constitution or any other law – shall be laid before Parliament,  shall be published in the gazette on or before the day they are so laid before Parliament, shall come into force at the expiration of a period of twenty-one days of being so laid unless Parliament, before the expiration of the said period of twenty-one days, annuls any such orders, rules or regulations by the vote of no less than two-thirds of the Members of Parliament.

Hon Mathew Sahr Nyuma underscored that the Opposition APC in Parliament neither objected to nor called for the annulment of the Proclamation but instead they chose the path of obstructing the Parliamentary process by recourse to physical violence in the Chamber directed at the person of the Speaker and other Members of Parliament as well as tearing up the Presidential Proclamation.

He added that secondly, the reference by the Leader of the Opposition to “…a plan to use the Public Elections Act to introduce a PR system….” is equally erroneous.

According to him, contrary to his opinion there is no need to amend the Public Elections Act to introduce a PR system because it is already provided for in the Sierra Leone Constitution of 1991 as amended in 2001 in Section 38A.

“Any mention of it in any subsequent Public Elections Act is merely as an act of  amplification or elaboration of a provision that is already extant and is an integral part of the 1991 Constitution,” he pointed out.

The Leader of Government Business  says Section 38A of the Constitution makes provision for a system of Proportional Representation known as the district block representation system and it provides in subsection (1) as follows: “Where, under any law for the time being in force, a date for a general election of Members of Parliament has been appointed but constituencies have not been established in accordance with subsection (3) of section 38 for the purposes of such election, the President may, after consultation with the Electoral Commission, direct that such election shall be conducted on the basis of the existing districts in a manner to be known as the district block representation system instead of constituencies.”

He revealed that the system was in fact first applied in the public elections that were held in 2002.

“Thus seen, I hope you will understand why I have tried to clarify these issues as under my watch as Leader of Government Business, I will not allow Parliament to be used as a tool to subvert the Constitution nor is it helpful for any responsible political leader to mislead or in any way make negative remarks or threaten the peace and cohesion that the country is currently enjoying,” he concluded.