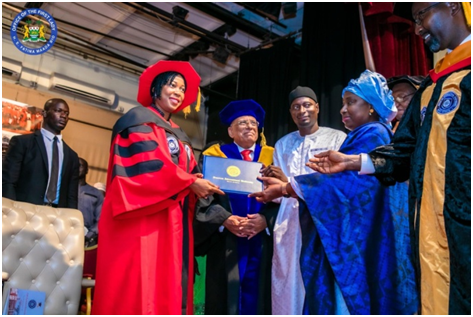 The First Lady of Sierra Leone, Madam Fatima Bio, was on the 4th June 2022 the proud recipient of a Honorary Degree of Doctor of Humane Letters bestowed on her, during an auspicious awards ceremony in The Gambia, by the American International University in West Africa. She was awarded in recognition of her outstanding humanitarian and philanthropic interventions across the globe.

During the citation presentation, Prof. Adama Sallah stated that Fatima Bio epitomizes bravery, intelligence and servant leadership, as evident in the massive impact being recorded by her humanitarian and official work across the globe.

The Prof. highlighted the rich academic background of the First Lady including her graduation from the Roehampton University with BA Honours in Performing Arts, which qualifies her as an International Actress and Script Writer.

“In 2015, she graduated with a BA Honours in Journalism from the prestigious London College of Communication in the United Kingdom,” he announced.

According to him the First Lady has led numerous gender, philanthropic and child welfare campaigns even before she became First Lady.

Based on what he said, Fatima Bio, in 1999 became the Champion of Meningitis Disease in Africa in her teenage years.

“She was the first to donate the sum of $10,000 for the fight against Meningitis in The Gambia,” he disclosed.

The Prof. further disclosed that the First Lady was the Pioneer of the Face of The Gambia Beauty Pageantry as a beauty queen herself.

“Many young ladies today In The Gambia who have excelled in their various fields went through her training,” he pointed out, adding: “In 2002,  she launched the biggest award ceremony exclusively meant to celebrate and promote women, which is the Gambia Women of Excellence Award”.

The First Lady has won the prestigious Best African Woman Actress Award, which she has been using to empower women and girls in the United Kingdom and Africa.

As First Lady, she is on record to have hosted one of the biggest peaceful protest marches against gender and child abuses – a campaign that was not only attended by her counterparts in the region but raised international attention to the issue of rape and gender abuses. That marked the start of her flagship Hands Off Our Girls Campaign.

He described the Hands Off Our Girls Initiative as the biggest and most impactful child rights campaign that led to a presidential declaration of national emergency on rape and sexual violence and the ultimate review and strengthening of the Sexual Offences Act.

She also played a major role in the establishment of the first ever Special Court that is now being used to prosecute rape offenders.

He also highlighted the launch of the free sanitary pads distribution campaign spearheaded by the First Lady as an offspring of the Hands Off Our Girls Campaign and to complement the Free Quality Education Initiative of the Maada Bio led Government of Sierra Leone.

She is currently constructing an ultra modern 500 beds hospital, which will become the biggest hospital ever constructed by an African First Lady, a nursing school, center of excellence for rape victims and an administrative block.

She has constructed an ultra modern vocational school for police wives, provided livelihood support through the national food basket, constructed 11 Mosques with some having Arabic Schools.

“She has distinguished herself in the entertainment industry as an actress, script writer, executive producer, and multi-award winner,” the Prof. pointed out.

Her advocacy resulted in the recruitment of the first exclusive female brigade of the Republic of Sierra Leone Armed Forces.

The Prof. went further to reiterate that the African Union appointed her as Champion for Sanitation and Hygiene.

The United Nations, he said, has also honored the First Lady as the Champion for the UNAIDS Education Plus Initiative alongside President Macky Sall of Senegal.

She is also a member of the Advisory Board of the United Nations Institute for Training and Research.

“Her philanthropic character is inborn and she is a fantastic role model that leads by example,” he highlighted.

“Her greatest strength is her ability to achieve any goal she sets. Some say it is divine. People close to her say it is pure undiluted hard work. While others insist it is a combination of both divine intervention and hard work.”

Following the conferment of well deserved Honorary Doctorate Degrees on the First Ladies of the Republic of Sierra Leone and The Gambia, Dr. Fatima Maada Bio and Dr. Fatoumatta Bah-Barrow respectively, the awarding American International University took the celebration a step further by hosting an auspicious dinner in honour of their fresh graduates.

The University’s Chancellor insisted at the dinner that the world should remember to henceforth refer to the new Honorary Doctorate Awardees as DOCTORS while describing the celebration as a historic honor.

On her part, the First Lady, Dr. Fatima Maada Bio expressed appreciation over the decision of the University to recognize her work in this unique way.

She urged the University to remain steadfast in promoting women in the region through recognition of their work and formal knowledge imparting.

She also expressed her undiluted love for Sierra Leone and The Gambia for making her the person she is today, with special reference to Sierra Leone for giving her the opportunity to serve as First Lady.

“Thank you Sierra Leone for giving me the opportunity to serve you; thank you Sierra Leone for making me understand what it means to be a woman that is determined to make a change; thank you for giving me the special privilege and space to be your First Lady. I pray that by the time I leave office I would have served you with distinction and you would be proud to call me your First Lady,” she asserted.

She expressed appreciation to all those that have invested in her in diverse ways. 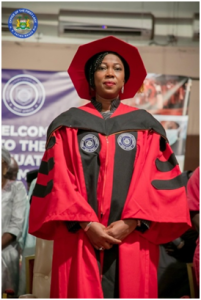