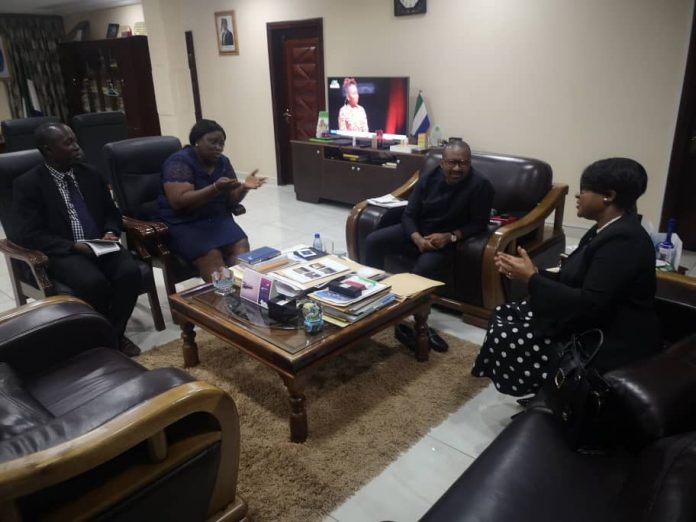 Discussions centered around expanding and strengthening the work of the Board in Correctional Centers around the country, working closely with the Justice Sector Development Project, targeting activists of the various political parties for community outreach events, making conditions of service of staff particularly Lawyers competitive, having the Board on the Presidential Pardon Committee and tapping into donor funds meant for access to Justice.

The Chair and the Executive Director also briefed the Vice President on the achievements of the Board, noting that the Board has a presence in 14 of the 16 Districts in the country.

In the furtherance of its work, last week when Jenneh Sesay of Melron Street in Wellington paid a visit to the Legal Aid Board Office in Freetown to plead for legal assistance for her indigent son Ibrahim who was remanded at the Pademba Road Correctional Center, her plea was addressed by the Board as she received medical support for the severe burns in her face.

Jenneh is epileptic. In November 2018 she had an attack while preparing food for the family. She fell on the fire at a time when there was nobody to come to her rescue.  As a result she sustained severe burns which disfigured her face.

She was admitted at the Rokupa Hospital and subsequently discharged. She returned home to face a new reality of living with a disfigured face. To add insult to injury, she also had to continue life at least for the time being without her son who is remanded at the Pademba Road Correctional Center.

The quest for justice for her son led her to visit the Legal Aid Board office in Freetown in July 2019 to plead for legal assistance for her son who had been charged with causing grievous bodily harm with intent.

At the Legal Aid Board she secured assistance for herself and her son. “We are going to assist you and your indigent son,” the Executive Director of the Board, Fatmata Claire Carlton-Hanciles told her. She referred her to Dr. Fadlu-Deen who is the Board’s focal person at the Connaught Hospital for further medical treatment.

As part of an agreement based on trust with the office of the Chief Medical Officer, sick clients discharged from correctional centers in Freetown are referred to the Connaught Hospital for free medical attention and treatment.

The Authorities at the Connaught hospital referred Jenneh to the Ministry of Health and Sanitation since hospitals do not have the facility for plastic surgery. The case was consequently referred to State House for possible assistance with plastic surgery abroad.

It was all smiles when Jenneh reported how Government has agreed to fund her operation in India and also importantly to thank the Executive Director for ensuring she benefits from a facility meant for its clients. She will be leaving for India next week.

Ms. Carlton-Hanciles took the opportunity to thank the Government for the gesture and the authorities at the Connaught Hospital for their support to sick clients of the Board. “I cannot imagine releasing sick clients from prisons and cells into the community who do not have money to buy food let alone medical treatment,” she said.

Meanwhile, Jenneh’s son Ibrahim is among 141 inmates/cases represented by the Board in the September Criminal Call Over sessions of the High Court around the country. However, Ibrahim is still at the Pademba Road Correctional Center because he could not fulfil the bail conditions.

As her departure date draws near, Jenneh has still not got anybody to stay in her apartment whilst she is away in India which is why she is again seeking the assistance of the Board with fulfilling her son’s bail conditions.