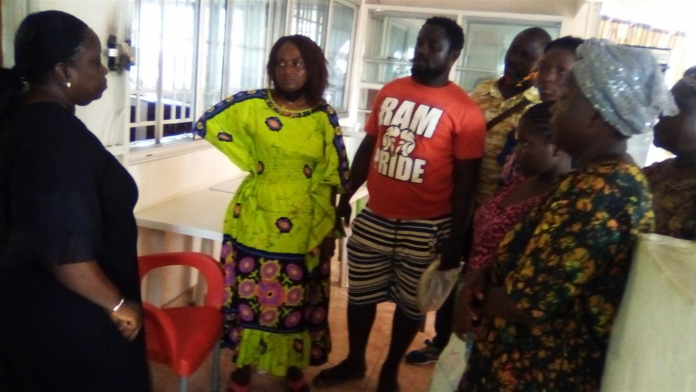 Fatmata Claire Carlton-Hanciles, Executive Director of Legal Aid Board, on Tuesday, 20 October 2020 reconciled a client of the scheme, Abdul Rahman Bangura, 30, and his mother Zainab Koroma. The union followed his discharge by the Court on the same date.

The usual post-discharge briefing ceremony for newly released clients took place at the Head Office of the Legal Aid Board in Freetown. Abdul was accompanied by his eleven-year old daughter and relatives including his mother, sister, junior brother, mother-In-law and brother-in-law.

Abdul had been rejected by his mother Zainab Koroma who was the complainant in the matter for which he was charged to court. This means Abdul had no home to return to following his discharge. With the intervention of the Board both parties were reconciled and as such Abdul was free to return home.

Ms. Carlton-Hanciles admonished Abdul to be law abiding, respect her mother and other relatives, seek help with his addiction and find something to do even if it means volunteering to acquire skills. “I will contact our partner to see if they can be of help,” she said. She appealed to the mother to accept her son back home and help him to become independent.

The mother, Zainab, said she had endured several abuses, intimidations and threats directed at her person by her son. Zainab described her son as a drug addict and someone who was misled by his peers and therefore misbehaves quite a lot especially when he is hungry.  “He will come home and demand food from me and will misbehave when it is not provided,” his mother said.

The mother reported the matter to the Police after Abdul threatened to kill her if she does not bring back home his daughter. The mother of his daughter had taken custody of the child. Abdul was angry about this and had blamed his mother Zainab for what had happened and therefore gave her an ultimatum to bring back his daughter.

Abdul’s mother reported the matter to the Adelaide Street Police station. He spent 19 days in police cell during the investigations and the matter was charged to court in September 2018. He was remanded at the Pademba Road Correctional Center on September 2019 until 20 October 2020 when he was discharged by Justice Komba Kamanda because the prosecution had offered no evidence in his trial. This is despite over two-years on remand with forty adjournments most on the request of the prosecution.