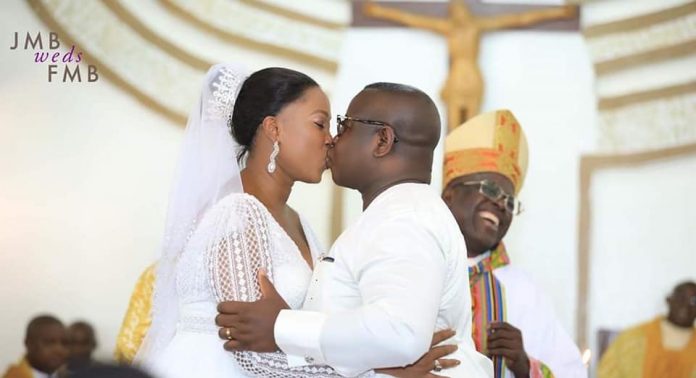 In the wake of heated debates relating to the much debatable news item of the times, the wedding between the First gentleman and the First Lady, on February 21, 2020 Sierra Leone’s President Julius Maada Bio finally exchanged wedding vows with the First Lady Fatima Bio at the St. Paul’s Seminary Chapel in Freetown for the second time. It is stated that President Bio first married Fatima Jabbie in the UK in 2013 before he became President. That union, according to what was understood, was a civil and traditional union but not a “white wedding”.

According to the Archbishop of Freetown, there are no records in the Catholic Diocese of Sierra Leone to prevent the President who was married before to Francess Bio in 1992/1993 from remarrying again.

The President and Francess divorced and he presented the annulment of that union to the Diocese. In a letter published last week, the Archbishop said that although the President was married before it was not a marriage officially recognized in the church, therefore, it does not break Catholic law against divorce for President Bio to marry Mrs. Bio in the Catholic Church.

To reiterate, finally on Friday 21st February 2020 the bells rang in, as President Julius Maada Bio waited for his lady love to walk down the aisle.

President Bio and First Lady Fatima Bio exchanged their vows in a Catholic Church. From what this medium learnt the two were married in a civil ceremony in the UK seven years ago.The First Lady is a Muslim but such mixed-faith marriages are common in this country.

According to the Ministry of Information and Communications the ‘wedding’ was be a private affair. But critics had said it will have all the trappings of public office – the Presidency, which will make the wedding a public matter.

Estimates put the cost of the wedding at hundreds of thousands of dollars. But according to Ministry of Information officials not a penny of that cost was met by the taxpayer. But many in Sierra Leone were doubtful.

In 2018, after winning presidential election with a very narrow majority of about a  few thousand votes, and unable to win  parliamentary votes, President Bio vowed not to default to similar pattern of reckless economic behaviour in governance. He began with an economic austerity many applauded, which he said was designed to close leakages in government finances.

Two years on, there are signs of avarice and vanity creeping into the psyche of the Bio-led Government, stemming from State House, from where much discipline was promised. There are financial leakages reported by the Auditor General in her latest report across government, as Billions of Leones cannot be accounted for.

As president Bio and the First lady renew their wedding vows, most people in the country will be worrying about where their next meal will come from.

When this medium went out to gauge the opinions of a cross section of Sierra Leoneans about the wedding one striking response was that , “no one is denying the Bio’s right to renewing their wedding vows if that’s their priority. But when the private life and decisions of the President affect his public life, questions must surely be asked about his sense of judgement, his ability to govern and lead the nation out of the deep economic mess and social divisions that have opened up in the last twelve years.”