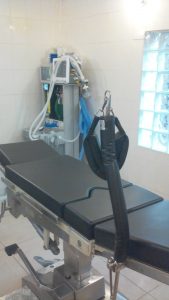 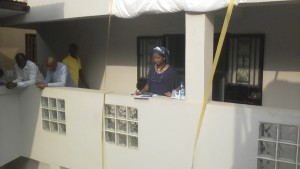 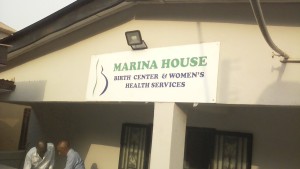 On Sunday 3rd March 2019, Sierra Leone’s newest and second private Birth Centre in the country was officially unveiled at 54 Circular Road in Central Freetown. Present at the ceremony were several stakeholders including Dr. Samba, a popular gynaecologist, the head of Midwifery at the College of Medicine and Allied Health Sciences (COMAHS), Dr. Joan Shepard, Dr. Mike Kamara, Mrs. Jennifer Renner-Thomas, Mrs. Amber Coker etc.
Speaking during the opening ceremony, amidst intermittent bursts of emotion, the Centre’s Clinical Director, Junova Swarray (Nee Ellis) gave a brief background into the journey leading to the establishment of the centre at Circular Road. She disclosed that she was motivated by her 3 year old daughter (now 11years) to take up the challenge to establish the centre. This motivation, she added was also premised on the belief that she was destined to embrace women’s issues, especially in the area of delivery.
Digressing further on her belief that she was predestined to work in that field, Junova dissected her name, which she maintained is a pointer to her future engagement. Born on the 26th of June and her late father on 26th November, she said that the blend of both months is ‘JUNOVA’. Furthermore, the combination of the name of the Roman Goddess of Child Birth (JUNO- meaning every woman needs her personal guardian angel) and the female reproductive organ, the Ovary (women’s eggs), form her name. She therefore had this belief that she was destined to work in that field. As a Maternity-in-Patient Manager in one of the renowned teaching hospitals in the UK, she has vast experience in practical delivery of pregnant women and wanted to replicate them in Sierra Leone. This centre, she maintained, is her own way of giving back to Sierra Leone and hoped for its replication all over the country.
Marina House Birth Centre is named after her late mother, who died due to cervical cancer and House is a place that one can feel relaxed, secured, comfortable, nurturing, get respite and care. Thus the Birth Centre is organised to encourage pregnant women deliver amidst an atmosphere of peace and tranquillity, with latest therapeutic measures to facilitate the right atmosphere for a relaxed delivery. She intimated that there is musical therapy, pool therapy and close personal interaction between the nurses cum midwife and the patients. She maintained that what will take place in the centre will be along best international practices. She added that there will be no need for an ambulance as all the equipment for delivery are in place and even in cases where surgery is needed, the expert surgeons will be available as a theatre is in place for any such cases. The centre has fully air conditioned maternity rooms equipped with TV sets to enhance relaxation of the patients, delivery room, operating theatre, laboratory etc. a real sense of being looked after during labour (is their Trade mark). Midwives in the facility will be with the patients during labour and be encouraging them to hold on. They will display that high level of professionalism where patients are encouraged rather than shouted at. The centre will be run on a 24 hour basis (3 shifts) and there is going to be that one-to-one care in the institution.
On the issue of cost, Madam Junova said that their charges are competitive and are within the reach of many citizens. She invites citizens to come and hold discussions on the charges, admonishing them not to shy away because of the facilities as negotiations can be done and a common ground reached. The hospital has qualified staff and there is commitment by professional midwives who had hitherto retired, to come on board and offer their services. She expressed appreciation to various personalities, singling out her care taker, Amadu for being there all those years.
Sia Katherine Sohna, the MHBC’s first patient, in an exclusive interview with this medium said that she watched the Proprietress of the institution on television, explaining the facilities and care they offer to their patients. This then moved her (as this is her first pregnancy) to contact them. She maintained that being anxious about having safe delivery; she was looking for a place with experts and trained personnels and found it in this institution. She is now pleased and hopeful of safe delivery and called on other pregnant women to come on board for better and proper health care during delivery.
Dr. Joan Shepard, Head of Midwifery at COMAHS, expressed pleasure at the facilities in the clinic, adding that it will enhance further knowledge and experiences of some of her trainees at COMAHS. She praised the Proprietress for this noble act and hoped other clinics will emulate the standards set in the facility. She noted that midwifery is a delicate area because one mistake can be fatal, so there is every need for professional service delivery and concern for detail. She stressed on the protection of the health care workers with the requisite protective gears as they deal with a lot of body fluids. She noted that the facility and the caliber of staff will render quality services to their patients.