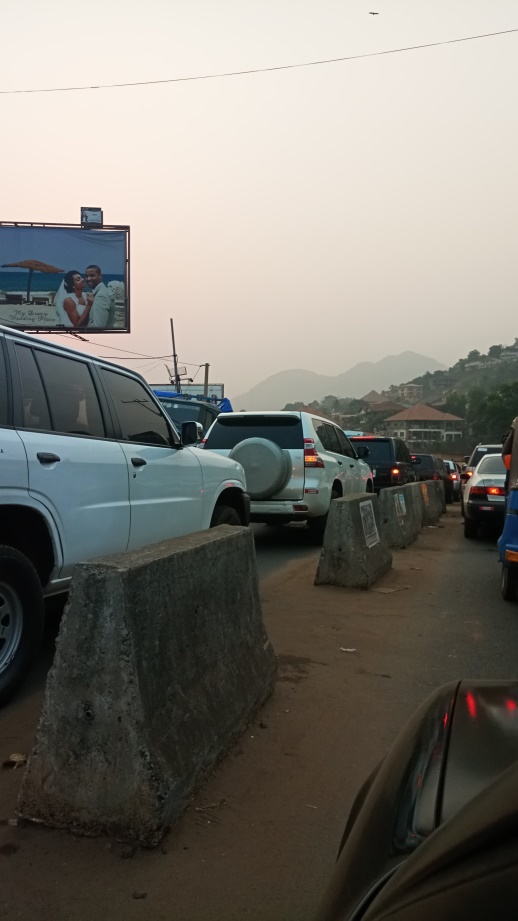 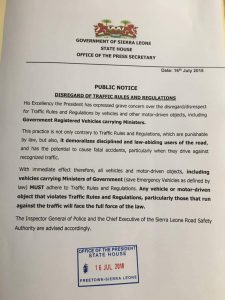 The way and manner in which vehicular traffic has degenerated into an eyesore and posing potential serious danger and threat to lives and properties has become a serious cause for concern. What is really mind boggling and heart rendering is the lukewarm approach by the Sierra Leone Police of the traffic division and the Traffic Corps are dealing with the situation of violation of traffic regulations by commercial , private and even Government drivers who everyday with impunity are behaving recklessly creating avoidable inconveniences and sometimes leading to fatal accidents.
As if they are not trained to deal with traffic issues, the Police particularly turn blind eyes to the excesses of drivers leaving them to just behave according to their whims and caprices.
Coming to work yesterday, 5th March 2019, from the Goderich axis this writer experienced first-hand at Lumley how certain drivers deliberately left the lanes they were supposed to be driven on diverting to the other lane meant for vehicles coming from the opposite direction thereby intensifying traffic build-up.
The Lumley experience is just an isolated case as this abnormally takes place on Kissy Road, East End Police and other parts within the city. It has become so lamentable preventing school going pupils to attend school timely and even return home quickly after school not to mention how it negatively affect workers.
What was so annoying was seeing traffic police officers milling around doing nothing to arrest the untoward situation.
When one of them was asked why no action was taken all he could reply was that doing so may jeopardise their jobs.
What has become so funny and bizarre is that some of these Police Officers are always noticed saluting whenever they see a vehicle with tinted window screens going to the extent of giving such preferential treatment by allowing them to speedily drive through even embarrassing other drivers. They act panicky in that way as if they will be castigated but to be very frank it smacks of sycophancy.
To justify that this ugly trend has become very noticeable and unbearable even though the SLPP led Government under the leadership of President Julius Maada Bio highlighted the issue on the 16th July 2018 encapsulated in a Public Notice it continues to get worse everyday round the clock.

In the Public Notice it was emphatically maintained by Government that “His Excellency the President has expressed grave concern over the disregard/ disrespect for Traffic Rules and Regulations by vehicles and motor-driven objects including Government Registered Vehicles carrying Ministers. This practice is not only contrary to Traffic Rules and Regulations which are punishable by law but also demoralizes disciplined and law-abiding users of the road and has the potential of causing fatal accidents, particularly when they drive against recognized traffic. With immediate effect, all vehicles and motor-driven objects including vehicles carrying Ministers of Government (save Emergency Vehicles defined by law must adhere to traffic rules and regulations particularly those that run against the traffic will face the full penalty of the law. The Inspector General of Police and the Chief Executive of SLRSA are advised accordingly.”
No research is needed to prove that some of the country’s traffic police officers are well corrupt, unpatriotic paid from the people’s taxes that run a well-knit extortion, bribery and intimidation racket.
Disgustingly, they are more interested in extorting drivers than actually and professionally discharging their duties within the context of enhancing adherence to traffic rules and regulations.
The Traffic Corps are a little better in the area of enforcing traffic rules and regulations. Seemingly though, it appears as if they are working in concert with certain errant Traffic Police Officers as accomplices deeply enmeshed in taking bribes.
“I am sick and tired of this madness and brazen show of disregard by reckless drivers as every day they put our lives in danger. The Government needs to act tough against the errant ones and institute strict penal measures,” a pot-bellied man only known as Mr. Amara fumed.
A shop owner at Lumley confessed that drivers’ reckless behaviours are not strange in that part of the country further suggesting that the Sierra Leone Road Safety Authority (SLRSA) should come onboard robustly and try to restore sanity.
From what majority of Sierra Leoneans that were interviewed recommended is that President Julius Maada Bio must take stern action to root or stem such reckless and unprofessional attaitudes.