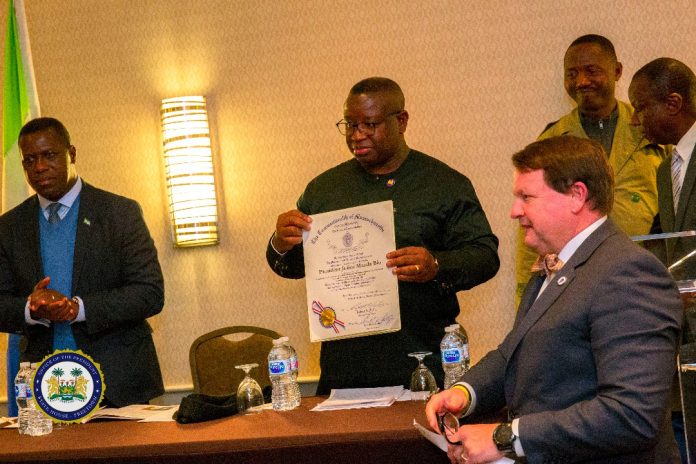 During a well-attended and interactive meeting His Excellency President Julius Maada Bio was awarded by State Representative, Shawn C Dooley of the House of Representatives of The Commonwealth of Massachusetts in Boston.

Honouring President Bio, the State Representative said that he was very impressed with the leadership of the President in transforming Sierra Leone.

Shawn C. Dooley also congratulated President Bio for fostering a great friendship between Sierra Leone and the Commonwealth of Massachusetts through this historic visit.

According to the citation of the award from the State Representative of the Massachusetts House of Representatives to President Julius Maada Bio, it reads: “The entire membership extends its very best wishes and expresses the hope for future good fortune and continued success in all endeavours.”

The award of President Julius Maada Bio took place during a town hall meeting with Sierra Leoneans where President Bio also highlighted his achievements of Government in less than one year.

In his address, President Bio spoke about his commitment to human capital development through his Free Quality Education Programme, the fight against corruption, the commissions of inquiry among other things. He also told the audience that his government has launched the Medium Term National Development Plan which was inclusively prepared to address the development challenges of our country.

During the town hall meeting, the Chairman SLPP North America, Mohamed Bah moved the vote of thanks while the meeting was chaired by the Sierra Leone Ambassador to the United States of America, H.E Sidique Abu Bakarr Wai.

On Thursday, 7th March, His Excellency President Julius Maada Bio continued his formal engagement with a visit to the Massachusetts Institute of Technology where he was received by Cindy Barnhart, Chancellor. The President visited Harvard University on Friday 8th March 2019.