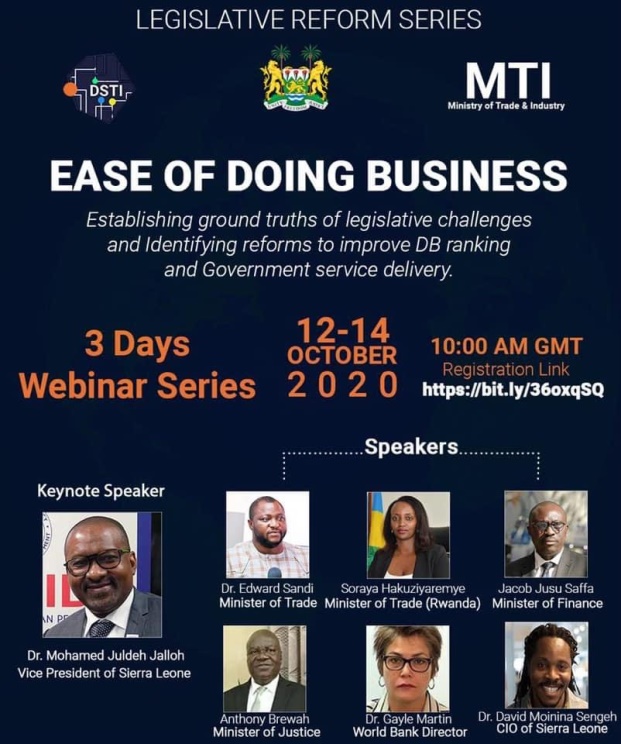 The Ministry of Trade and Industry in partnership with DSTI and the Ministry of Justice have commenced a 3 days Legislative Webinar Series on the 12th October, 2020 which will end on the 14th October 2020.

This important event is part of the Trade Ministry’s commitment to drive policy reforms in order to improve Government service delivery and ultimately Sierra Leone’s ranking on the World Bank Ease of Doing Business.

In his opening remarks, the Minister of Trade and Industry, Hinga Sandy, informed participants and the audience that the World Bank undertook a diagnostic study in areas relating to business environment reforms noting that the study resulted in the development of a comprehensive Doing a Business Roadmap for Sierra Leone which was launched by the World Bank in November 2019.

He furthered how they took stock of current reforms, those in progress and proffered recommendations in various areas covered by the Doing Business Report.

According to him, the report is a living document which could be updated from time to time according to progresses made by the country.

The Minister disclosed that the outcome of the three day workshop will complement the recommendations of the Doing Business Report Roadmap.

He particularly commended the Minister of Finance and World Bank Directors for facilitating a World Bank Grant of $40 Million from the International Development Association (IDA) to support business environment reforms, investments and the growth of Small and Medium Enterprises (SMEs).

“The Project will facilitate business formalization, by improving the processes of business registration, licensing and permitting. This will be achieved by reviews and reforms of regulations and laws to streamline these processes, digitalization of forms, procedures and information, implementation of user-friendly interfaces, training of Government personnel to effectively use streamlined processes, and communication campaigns to inform the target audience and its benefits,” he maintained.

Hinga Sandy intimated that his Ministry had and is still putting measures and modalities in place to ensure that the business environment is sanitized with optimal benefits in line with the New Direction development agenda.

He ended up by congratulating the Directorate of Science, Technology and Innovation (DSTI) for putting together the electronic platform as well as other inputs. He promised that the recommendations that would be made will be implemented to the letter.

Madam Saffie Deen-Tarawally, the Director of Policy and Doing Business Coordinator in the Ministry of Trade and Industry, in giving a synopsis of the status quo of doing business in Sierra Leone stated that the IFC/World Bank Doing Business Reforms project was established by the World Bank in 2002, as a flagship project that measures the ease of doing business in 190 countries/ economies in the world, for private sector development further revealing that Sierra Leone joined the project in 2005.

According to the Doing Business Coordinator, the project looks at domestic small and medium-size companies and measures the regulations applying to them adding how it is a project where growth opportunities for local businesses are compared and measured annually amongst economies worldwide.

“The Doing Business Reforms project is an integral part of Government’s commitment in the New Direction and the Medium Term National Development Plan, to improving Sierra Leone’s business environment,” Madam Saffie Deen-Tarawally highlighted and furthered how the Ministry of Trade and Industry which is responsible for Private Sector Development is responsible for coordinating the Reforms carried out by MDAs and report to the Ministry of Trade and Industry.

In terms of the indicator that has to do with construction permits she said that indicator tracks the procedures, cost and time to build a warehouse- including obtaining the licenses and permits, submitting all required documents, requesting and receiving all necessary inspections and obtaining utility connections.

In addition, she continued, the Dealing with Construction Permits indicator measures the building quality control index, evaluating the quality of building regulations, the strength of quality control and safety mechanisms, liability and insurance regimes and professional certification requirements.

Dilating on the challenges connected to the aforementioned indicator, the eloquent and charismatic Director of Policy mentioned: the need to streamline the current water connections at the Guma Valley Water Company saying that has been a big challenge for the indicator, as the World Bank records that it takes 90 days to get water connection in Sierra Leone.

She called for building laws and regulations which she said they would be looking at under the Diversification Project revealing that there already a draft Building Code.

“The Ministry of Lands needs to formulate a new Housing Policy,” she suggested adding that the coordination process within the departments in the Ministry of Lands involved in the permitting process should be improved for the speedy issuance of Permits.

She informed how an electronic single window and online approvals will be implemented under the Diversification Project.

“I want to suggest that in the review of the required legislation, let us include statutory time limits for the signing of Survey Plans and with penalties,” she averred.

The Doing Business Coordinator stated that the Registering Property indicator examines the steps, time and cost involved in registering property, assuming a standardized case of an entrepreneur who wants to purchase land and a building that is already registered and free of title dispute. She added that the indicator also measures the quality of the land administration system in each economy.

“With the Credit Reference Bureau, we are stuck as we are still not able to populate the database due to the lack of a Single biometric identifier but much progress has been made to the Collateral Registry. There is a new Borrowers and Lenders Act 2019 which caters for both movable and immovable Assets. We are in the process of recruiting a Consultant to draft the Regulations, upon which we will upgrade the Collateral Registry,” she continued.

She said the Starting Business indicator measures the number of procedures, cost and time for a small to medium- sized limited liability company to start up and formally operate in Sierra Leone.

According to her this country is ranked 58 from 190 economies adding that the Indicator will be further improved under the Economic Diversification Project.

“Procedures required to register all types of businesses will be streamlined and automated, all permits, licenses and approvals needed for business operation, leading to a One Stop Shop and an online payment system will be introduced,” she optimistically asserted.

She pointed out how the Freetown City Council will also be on the platform as they intend to capture all small businesses registered with the Council.

“UNCTAD is to conduct a feasibility assessment of a Single Window for business creation and licensing. They will also assess the digital preparedness and identify the potential challenges to the deployment of an eGovernment system in Sierra Leone,” she furthered.

Madam Saffie Deen-Tarawally stated that the Doing Business Technical Team has already started working on the Legislative reviews of some of their business legislations.

“Terms of References have been developed and submitted by some institutions which have already been forwarded to the World Bank. The outcome of this 3 day virtual workshop will be submitted as an addendum to what we have already done,” she stated.

Another high profile personality who spoke on Day 1 was the Minister of Finance, Hon. Jacob Jusu Saffa whom in his statement outlined the Government’s commitment to make the country a place where businesses could be established with ease. He lamented the COVID-19 affected various businesses in the country maintaining that Government is putting more premium on economic diversification as encapsulated in the Medium Term National Development Plan. According to him several reforms are ongoing in that direction and one of them has to do with doing business.

On her part, the World Bank Country Representative, Gayle Martin said they have been raking countries for many years now with regard Ease of Doing Business. She maintained that setting the environment of doing business cannot be achieved by only one institution or entity but rather it is multi-dimensional as other relevant stakeholders must play their roles. According to her setting the environment right for doing business is a work in progress but acknowledged that changes are taking place in the right direction. She disclosed that a country’s ranking depends on not only what a country is doing but rather what others are also doing. “If others are moving in a fast direction then it means you will be in the same position,” the World Bank Country Representative stated.

Attorney General and Minister of Justice, Anthony Brewah assured all that his Ministry will be reviewing all existing laws relating to Doing Business in the country and will ensure that they are investor friendly. He maintained that it is important to uphold the rule of law and deliver justice in a timely manner in order set the right environment of establishing businesses in the country.

Earlier, the Minister of Trade of Rwanda shared her country’s experience of easing the process of doing business laying premium on workable legislations and embarking on sustainable production of manufactured goods.

Before launching the three day Ease of Doing Business Legislative Reform Webinar Series, the Vice President, Mohamed Juldeh Jalloh, stated that having the right business environment is vital to attracting private sector investment underscoring how private sector investment is key to increase revenue and create jobs. He dilated on the history of State collapse and development finance maintaining that in contemporary times countries have the responsibility to chart the path for development.

“Sierra Leone is not the birthplace of Prophet Mohamed or Jesus Christ where miracles are expected in terms of economic growth. We have to set the stage right for investors to become attracted,” the Vice President enjoined adding that legislative reforms are significant to make Sierra Leone a competitive investment hub.