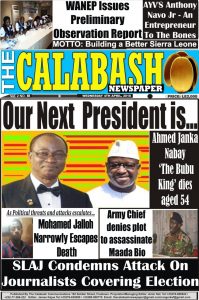 Barely days after the first round of elections on the 7th March 2018, which saw the two main political parties in the country, the All People’s Congress (APC) and the Sierra Leone People’s Party(SLPP) emerging as the two parties with the highest number of votes, yet lacking the threshold of 55% to clinch State Governance, some SLPP supporters went on the rampage on 15th March 2018, armed with knives and sticks attacking and mercilessly beating a well-known APC youth , Mohamed Jalloh, at his residence, rendering him unconscious.
According to family sources, Mohamed Jalloh had on several occasions complained of harassment from supporters of the SLPP whom he met at an entertainment centre. They had earlier threatened to kill him and only made real their threat after the first round of the election. The family members maintained that Mohamed Jalloh was visibly disturbed prior to the attack of 15th March 2018, as he was threatened most of the time along the street.
According to family members, on 14th February at a pub in Waterloo, whilst in the company of some of his friends and supporters of the then ruling party (the APC), Mohamed Jalloh was suddenly confronted by some youths of the SLPP party, who accused him of supporting a party that has ruined the country’s economy. They then identified themselves as SLPP and wore green T-shirts with the party’s logo printed on it. An argument ensued between them and these youths then threatened to deal with him. His colleagues then advised him to leave, which they did. They further explained that since that day, which was barely few weeks to the First round of the election slated for 7th March 2018, things changed for him. They vowed that anytime he steps out of his home, he will encounter this group of youths and they continually threatened to beat him up.
They went on to explain that on the night of 15th March 2018, after the announcement of the First Round elections results, in which both the APC and SLPP parties emerged as favorites for the second round election slated to take place in the next 2 weeks, this group of youths attacked their home. At about 3.00am in the morning, whilst sleeping at home they were all rudely awaken by heavy banging on the front door of the house and the SLPP youths broke open the door and forced their way into the house, wielding sticks, knives and cutlasses. They then pounced on him with sticks and knives and in the struggle that ensued he lost consciousness.
This writer managed to speak to Mohamed Jalloh whilst he was in the hospital. Reeling with pain, he managed to explain that he was attacked by some SLPP Youths who had been threatening him and lost consciousness during the attack. He further explained that when he woke up, he found himself in the hospital and realized that he had sustained several injuries. He then displayed his injuries, which included a knife cut on his elbow, a swollen right foot believed to be hit by a strong object, a swollen shoulder, which he remembered was when he was hit by a big stick by one of his assailants, a broken right arm and bruises all over his body.
Family members contacted later, when news of his escape from death reached this writer, said that after being discharged from the hospital, Mohamed went home and on the 3rd April 2018, the night before the announcement of the results of the second round, the same group of supporters threatened to deal with him after the announcement of the results. They stressed that they will teach him a lesson he will never forget in his life. This threat to his life and memories of the earlier attack, which left him hospitalized, they maintained, was the main reason for his disappearance. They disclosed that Mohamed told them of his decision to leave the house before the youths get there, as they were barely counting the minutes to the announcement. Whilst they were having this discussion, they heard the voices of a crowd of youths approaching their house, raining insult against their family. Upon this development, Mohamed hurriedly left the house through the back door, few minutes before they bulldozed their way into the house. Since he left that night, his whereabouts has not been known and attempts were made by the former assailants to get him in the nearby houses and bush, but to no avail and they swore to track him down. The family members maintained that their properties were vandalized and no action has been taken by the Police to give them justice.
Up to the time of going to Press, the family intimated that no contact has been established between them and Mohamed Jalloh.