The First Lady of the Republic of Sierra Leone, Madam Fatima Bio, who is fondly referred to as ‘the mother of the nation and girl child defender’, on Friday, 18th October, 2019 in an ongoing national sensitization move, launched the “Hands Off Our Girls Campaign” in the Southern Province town of Moyamba.

Present at the launch were Paramount Chiefs, Members of Parliament, the District Council Head, Ministers, Civil Society activists, students and a host of other stakeholders in the district.

Host Paramount Chief, Foday Momoh Gulama, welcomed the First Lady and entourage to his Chiefdom in particular and Moyamba district in general.

He noted that the program is very essential for sober minded men who would adhere to the message that prohibits them from sexually tampering with young girls and domestically violating women.

“On behalf of the people of Moyamba district, we wholeheartedly welcome you Madam Bio and pray that the message you will disseminate here today will prove to be beneficial for all,” he entreated.

Moyamba District Council Chairman, Joseph Mbogba, in his statement said the people of Moyamba are sick and tired with the persistent reports of rape and domestic violence meted out against women and girls.

“Moyamba District has the highest number of rape cases reported. Violence against women increases every day,” he lamented, adding that as a Council and together with other stakeholders in the district they “will embrace the Hands Off Our Girls initiative,” revealing how they have put certain modalities in place to ensure that the initiative impacts meaningfully in the district.

“As a Council, we have factored the campaign in our 2020 budget, provided an office space in Council that will be overseeing the day to day issues brought forward as complaints,” he affirmed.

Abdul Joe Kamanda, on behalf of Civil Society Organizations in Moyamba, pledged their cooperation to continuously preach against the menace and facilitate the prosecution of perpetrators when necessary.

Longest serving Member of Parliament in the Well of Parliament representing Constituency 061 in Moyamba district, Honourable Veronica Kadie Sesay, said, before the launch of the Hands Off Our Girls Campaign, it has always been her dream and fellow female MPs to see a law set that would put to a halt the regular sexual penetration and sexual violence perpetrated against women and the Girl Child in particular.

She admonished the men present to take the campaign seriously in order not to find themselves behind bars. She reiterated the stance of the President and MPs to eradicate rape and all other forms of sexual offences.

She outlined three major components in the new Sexual Offences Act, which she says would trap offenders, those who compromise and secret solicitors who condone sexual offences against women and girls.

She concluded by admonishing the girls to be modest in their dressing, be steadfast in their educational pursuits and not to allow monetary influence to lead them to become child mothers and dropouts.

In her keynote address, the First Lady, Madam Fatima Bio, stressed the negative aspects of sexual offences on the image of the country, which has turned Sierra Leone into a laughing stock among other nations across the world in terms of the constant rape cases reported.

She called on the Paramount Chiefs of the land to include in their bylaws punitive measures for perpetrators of such crimes as actions by the Judiciary seems to be slow. Madam Fatima Bio further called on the school girls of Moyamba to resist the approaches of men towards them coming in the guise of Good Samaritans.

“Girls, your future is in your hands and your dreams of becoming the next First Lady, Lawyer, Doctor and Minister starts with the firm decisions you make today against the urge for material benefit from sex,” she admonished.

“Thanks to you people of Moyamba for believing in His Excellency’s leadership, but I am here this day to talk against the persistent horror which is befalling our girls,” she noted.

Appreciating the positive contributions of the people of Moyamba, the First Lady on that note took the opportunity to discourage them, especially the men, from the bad habits of sexual violence and rape against the Girl Child.

“As my fathers and traditional elderly people, the fight to put to a stop to sexual penetration and offences is not my fight alone nor his Excellency’s, but the fight of all, and it is on that note I handover the Hands Off Our Girls Campaign for the Moyamba district chapter to my noble Paramount Chiefs of the district,” she enjoined. 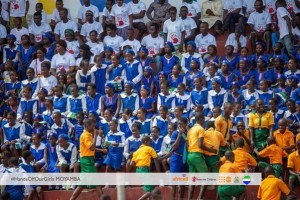