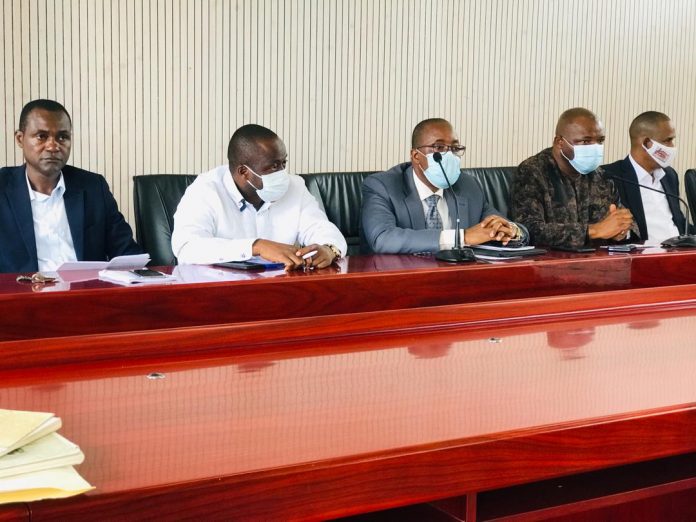 Members of Parliament and other stakeholders on the  4th August 2020, made relevant contributions to the proposed Cyber Security Bill during deliberations at the Pre-Legislative stage. The session was held in the new Administrative Building at Parliament.

In his opening statement, the Minister of Information and Communications, Mohamed Rahman Swaray, thanked the leadership of Parliament for giving them the opportunity to present the proposed Cyber Security Bill for onward enactment into law.

The Minister said as a Government their responsibility is not only to protect citizens in real life but also to ensure that citizens’ cyber space is protected.

He described the Bill as a specialized Legislation that required the expertise of professional to put together.

He stated that the Ministry had held series of consultations with Civil Society, MNO (Mobile Network Operators) Service Providers, Members of Parliament and a host of other stakeholders including the Attorney General’s Office.

Minister Swaray urged Members of Parliament present to patiently listen to the presentation and see how best they could make their inputs and also ask the necessary questions for clarification.

The Leader of Government Business, Hon. Sahr Mathew Nyuma, recalled that they attended the consultative meeting held at the Radisson Blu Hotel by the Ministry of Information where they extensively discussed issues relating to the proposed Cyber Bill including the Malabo and Budapest Conventions which set standards for the Cyber space.

Having been a victim of Cyber crime on a number of occasions, Hon. Nyuma warned that everyone will be vulnerable if the country does not enact tough laws to deal with the situation.

The Minister of Basic and Senior Secondary School Education,  Dr. David Moinina Sengeh, appreciated the Ministry of Information for putting such a Bill together, describing it as significant especially in this modern age.

He appealed to Members of Parliament to take into cognizance the fact that hacking can be used for negative and positive reasons and that should be considered when deliberating on the Bill.

Dr. Sengeh assured of his Ministry’s commitment towards the process and asked that the drafters be flexible as technology changes on a daily basis.

Hon. Chernor M. Bah, the Leader of the Opposition in Parliament, commended the Minister of Information and Communications for his hard work at the Ministry and encouraged him to continue in that direction.

He described the Bill as sensitive and the most important to be deliberated on by the present Parliament because it affects each and every one.

The Director of DSTI (Directorate of Science and Technology), Michaela Mackay, emphasized that the Bill be very clear on Offences and Punishments.

She encouraged the Minister of Information to work on the Data Protection Bill as well so that it can go alongside the Cyber Security Bill, maintaining that both Bills go together.

The Chairman of the Legislative Committee in Parliament,  Hon. Hindolo Moiwo Ngevao, said the proposed Bill was professionally drafted, and that when passed into law it will help address many issues in the Cyber space.

He assured that they will work tirelessly to ensure that they have a good piece of legislation that will stand the test of time.

Also to make statements were the Deputy Minister of Information and Communications, Madam Mamadi Gobeh-Kamara, and the Acting Chairperson of NATCOM, Madam Madiana Samba.