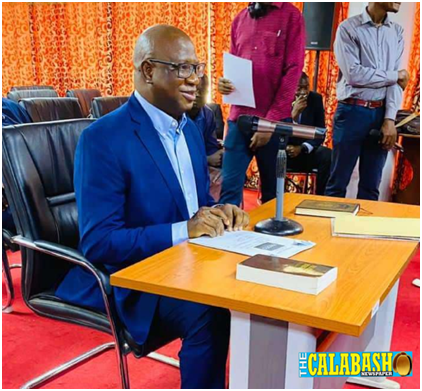 Members of Parliament of Sierra Leone, on the 5th July 2022, unanimously endorsed the newly appointed Board Chairman of the National Civil Registration Authority (NCRA), Sorie Fofana, the new Inspector General of Police, William Fayia Sellu and other appointees although initially there was an opposition of the nominee of the Deputy Director of the Sierra Leone Correctional Services, Colonel Sahr David Ngaujah.

Presenting the nominees, the Leader of Government Business in Parliament, Hon Matthew Sahr Nyuma, described Sorie Fofana as an outstanding and revered media practitioner who has proven to be trustworthy; adding that he has what it takes to serve in his new role.

Sorie Fofana was described by Members of Parliament as a fine gentleman that has demonstrated a high level of professionalism in journalism for decades by treating everyone evenly irrespective of their political affiliations.

Honorable Hassan Sesay, the Chief Whip of the main opposition All People’s Congress party, said that for Sorie Fofana to be appointed by His Excellency the President Dr. Julius Maada Bio for the second time as Chairman, shows that he has earned the respect of the President as a revered journalist that knows no boundary.

The Leader of the Opposition APC, Hon. Chernor Maju Bah hailed the new NCRA Chairman as a fine and cool gentleman that commands great respect among politicians.

In his summary, the Honorable Speaker of the House, Dr. Abass Chernor Bundu, commended the appointment of Chairman Sorie Fofana by President Bio as the right choice for the job. “Sorie Fofana has demonstrated a sense of professionalism in his career…This House wishes you well in your new endeavor as you go and serve the nation,” he said.

The Director-General of the NCRA, Mohamed Mubashir Massaquoi and management were also in Parliament to grace the occasion.

Congratulating the nominees after approvals, Speaker of Parliament, Hon. Dr. Abass Chernor Bundu said the nominees’ humility, honesty, and professionalism are credible to none. He expressed that, the nominees’ are expected to demonstrate the best performance in light of professionalism and praised the new IGP for claiming the ladder from a junior rank to the IGP. “We hope you will live to expectations of the House,” he concluded.

Seconding the motions, the Deputy Leader of Government Business Hon. Bashiru Silikie thanked President Bio for appointing qualified Sierra Leoneans to serve the State and went on to advise the nominees to sever diligently for the interest of the nation. He used the opportunity to outline the functions and responsibilities of Parliament, relative to law-making; representation, and oversight. He called on the nominees to serve well, adding, “in a not too distance future, we would be presenting our scorecard to the People of Sierra Leone”, he stated and went on to advise the nominees to deliver. He bestowed honour on the nomination of the Correctional Center Director General and other nominees.

He called on the IGP to work in consonance with the laws of the State and reaffirmed his historical service to the people of Sierra Leone and urged Senior Police Officers to support him to actualize his dreams.

Hon. Dr. Mark-Mahmoud Kalokoh in his submission, advised the NCRA appointee to work diligently and avoid the delay in the issuance of multipurpose identify cards to the people of Sierra Leone. He called on the IGP to do the needful in the execution of his mandate. He highlighted previous police incidents in the country and warned against police brutality.

Hon. Sengpoh Soloman Thomas, Deputy Speaker of Parliament said the nominees are hugely qualified and went on to advise them to go and do something different for the development of the nation. “We have a problem of mentality as a nation,” he noted and went on to plead on the nominees to sever in the best interest of the state.

On the incoming IGP, he caution him to do the needful and said “Any IGP that is popular among the people is not working”, and went on to state that, as a nation, lawlessness would not be tolerated. He said for any disruption of lawlessness, the politicians are the first to suffer and went on to congratulate the former IGP for serving Sierra Leone.

Hon. Hassan Sesay, Opposition Whip objected to the appointment of the Deputy Director General of the Correctional Center, citing that the latter is a military officer and not a prison officer. “Let a prison officer be given the appointment and not a military officer,” he reiterated and went on to state that, it is unfair to prison officers who wanted the position. On the incoming IGP, he acknowledged support for him relative to the good job he had been doing for Sierra Leone.

In rounding up the debate, the Leader of the Opposition Hon. Chernor RM Bah said lot has been said about the nominees and said he knew many of the nominees and their performances. He said Sorie Fofana is a fine gentleman and advised him to serve well in the NCRA position. On the other nominees, he expressed hoped that, they would deliver in the interest of the state. He said the incoming Director of Prison is a personal family member and encouraged him to deliver.

On the incoming IGP, he said the latter is a fine personality and hoped that he would succeed. He encouraged him to distinguish between a misdemeanor and felony. He encouraged the new IGP to work in line with the laws of the State “Let’s work on the positive”, and went on to state that, they would support him when needed.

Responding to MPs on Military officers heading public institutions, he said they resigned before serving. He said nobody is questioning the credibility of the proposed Deputy DG of the Sierra Leone Correctional Center, but questioned him as a military officer serving the Correctional Service.” He serves excellently in the Military both internal and external”, he informed and went on to state that as an opposition they are against his appointment because he is a serving military officer and not a prison officer.

In concluding the debate, Leader of Government Business Hon. Mathew Sahr Nyuma said they should not forget about their history and went on to highlight the recent laws enacted by Parliament, relative to the promotion of good governance and democracy. He said the Sierra Leone Police deserved respect and must be encouraged to implement law.

He said the appointment of the military officer is not a de-motivation, but a motivation and noted that ‘secondment’ is allowed in the Civil Service.

He encouraged Sorie Fofana for the NCRA appointment to do the needful to serve the nation and for the other appointees he asked them to serve well.

APC Takes the Lead in Parliament