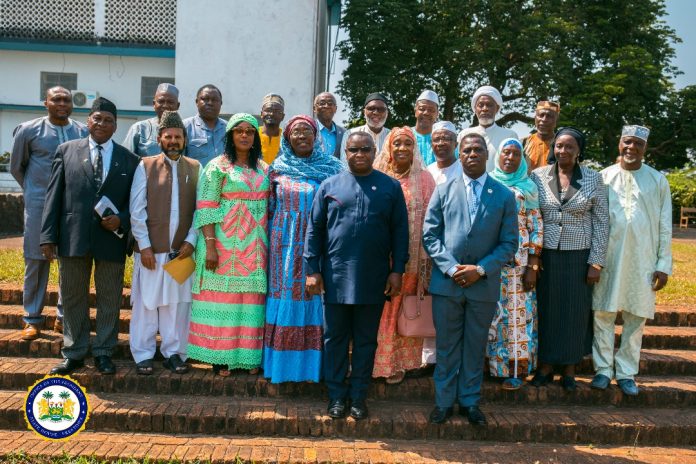 The Sierra Leone Muslim Congress and the Forum of Islamic Organisation for Peaceful Coexistence have commended His Excellency, President Julius Maada Bio, on his pledge to fight corruption.

Secretary-General of the Congress, Professor Babatunde Karim, said they were pleased with the initial steps to move the country forward by the New Direction government. He pointed out that the free quality education initiative was a testament to the Government’s commitment to improving the lives of every Sierra Leone child.

He commended the President for his steps in unifying the country as well as his determination to ending corruption in the country, adding that they were fully in support of the Commission of Inquiry. He noted that the Commission was actually meant to recover stolen government monies and assets and encouraged the Government to remain focus and avoid being distracted by sycophants.

“We are particularly delighted for all the strides you have made in this short time in office. We are happy with the management of the 2018 Holy Pilgrimage, which is the best we have seen so far and we hope that the years to come will be better. We are also grateful for your prompt actions taken on Muslim holidays.

“We are again excited about the ban on parading of masquerades not only on Muslim holidays but also on all Holy days. There is also an urgent need for more cemeteries within Freetown so it will be good to engage the Ministry of Lands to provide land to reduce the pressure on the already saturated burial sites within Freetown.”

Chairman of the Forum of Islamic Organisation for Peaceful Coexistence, Justice Abubakarr King, said the forum was ready to supplement the efforts of the Government to positively transform the country. He said, as Muslims, they were pleased with the level of tolerance between the two main religions in the country.
He also lauded the President’s readiness to fight corruption and expressed their excitement for the ban on all non-Islamic activities on the streets of Freetown, especially stopping masquerades on Muslim holidays. He said he was particularly happy with Government’s uncompromising position against rape and violence against women.

“We are happy for the Commission of Inquiry and believe that there is no element of a witch-hunt in it. We are fully behind it and our entire membership will support the process until the end. We commend you for the free quality education which is an initiative no one has thought of. Before now, quality education was for the rich. Under your leadership, it is now affordable,” he said.

In his response, President Bio said it was great meeting with members of the Muslim community. He said Muslims were in the greater majority in the country and that it was needful to provide them with the conducive environment to carry out their practice freely. He added that he was able to organise a successful Pilgrimage because of the credible people who were assigned to lead the process.

“We have to celebrate our religious tolerance because it contributes to the peace and security of the world. We need to live in peace and the Government will support your organisation to promote peaceful coexistence. We have to work with other religions for the peace of our nation. We should discourage any group of individuals that will want to bring chaos in our religions,” he said.

On the Commission of Inquiry, the President added that: “Before now, we had been rated as one of the most corrupt nations in the world. Now, that is beginning to change. The Commission of Inquiry is a way of cleaning our image and it will serve as a deterrent to even some of us in government now. So, we want the support of all because we cannot do it alone,” he urged.