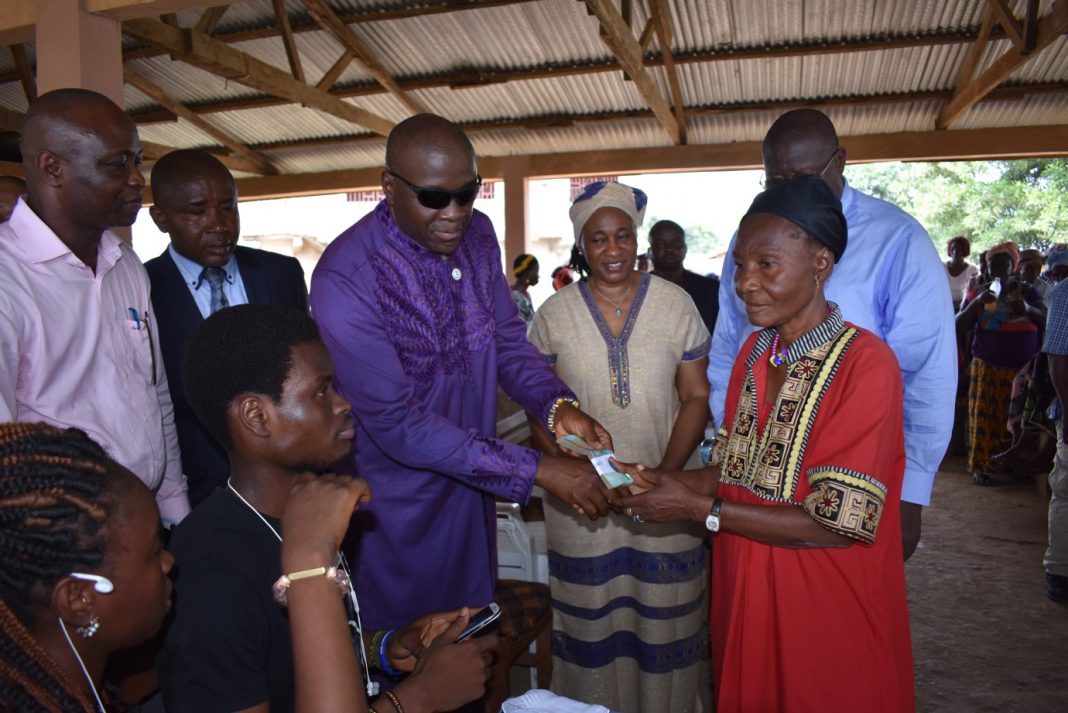 In furtherance of its mandate, the National Commission for Social Action (NaCSA) through its Social Safety Net Programme has commenced the payment of Cash Transfer to 28,538 households headed by vulnerable women in 506 communities across the country.

With funding from the Government of Sierra Leone and the World Bank, payment commenced on Wednesday, 25th September 2019 in the Western Rural District, targeting 2,666 households with a total of 1.5 billion Leones.

Representing the Commissioner at the Amputee Camp in Grafton, the NaCSA Deputy Commissioner who doubles as the Head of Programmes in the Commission, Dr. Sao-Kpato Hannah Isata Max-Kyne registered her appreciation to the President, His Excellency Dr. Julius Maada Bio for his support to the programme as demonstrated in his engagement with the World Bank for additional funding early this year in Washington.

Dr. Max-Kyne reiterated the importance of this particular payment, noting that the event marks the payment of the final Cash Transfer to exiting beneficiary households while setting the stage for the re-targeting of new beneficiaries within the communities or districts for the next phase of the programme. She congratulated the outgoing beneficiary households, whom she noted were able to utilize the support provided to them during their tenure in the programme.

Dr. Max-Kyne pointed out at instances where some beneficiaries have used their monies to build dwelling houses and in other cases to startup businesses from petty trading ‘falamakit’ to well established ventures. While this payment marks the end for their direct benefit in the cash transfer, she assured them of other NaCSA programmes which if they find themselves eligible will coop them.

Representing the World Bank, Dr. Abu Kargbo affirmed the goals of the Bank, which he noted are to reduce poverty in the world and to support government in promoting the wellbeing of its citizens. “It is the belief of the Bank that every citizen has the right to decent living. To ensure that no one goes to bed hungry, the Bank works with the Government to provide these monies for vulnerable households, which without these supports could not have been able to put food on their tables. These monies are meant to provide for food, basic healthcare services as well as to support in the education of the offspring”, he stressed.

The Rokel Commercial Bank Limited Sierra Leone is the new Payment Service Provider charged with the responsibility to do the cash transfer exercise countrywide. Performing the symbolic payment in one of the pay points, the Managing Director of the Bank, Dr. Crispin Williams expressed delight over the trust bestowed upon his institution and assured all of his staff commitment in following the due process.  He further emphasized the need for financial inclusion, which he noted could be of advantage to both the customers and the Bank. “As a bank, we do not only believe in receiving monies and keeping them but to grow the capacity of our customers in order to expand their business horizon”, he assured.

Being the final payment means the money should be used for a remarkable purpose. Madam Fatu Mansaray, a grandma in her late sixties from Grafton Community in the Western Rural has her own plan for this money. As one of the few beneficiaries who could now boast of a reasonable dwelling house and a petty business as a result of the programme, spending the final payment to add on her business as well as on the education of the grandchildren should not be considered wrong.

“I am very grateful to NaCSA for their support so far. This has been my only source of getting money, as no family member could afford to help. Although I am exiting the programme today, I am not leaving without something to point at. For instance, the first One Million Leones I got from this programme was used to change the roof of my house from tarpaulin to iron sheets.

Not only that, I started a petty business which I have managed. So with this final cash of One Million Leones as you could see in my hand, I am going to use part of it on my business while the remaining will go to the education of the grandchildren,” she explained. Like gramma Fatu, every beneficiary has its own individual plan for this money.

The Social Safety Net Programme is one of the biggest projects in NaCSA, aiming at providing unconditional cash transfer to the extreme poor. The Programme, which has already provided unconditional cash transfer to 28,538 beneficiary households in ten districts is expected with the additional funding of USD30, 000,000 (Thirty Million United States Dollars) from the World Bank, to extend to the other outstanding five districts and will target an additional 35,000 new households; making it over 70,000 beneficiary households in the entire country by the end of the Programme.