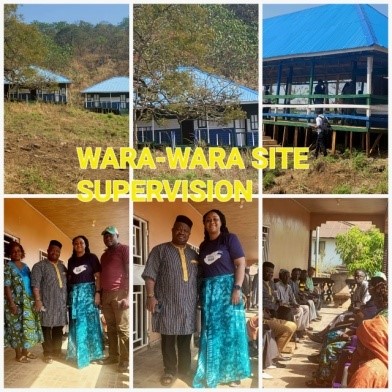 Fatmata Mida Carew, the General Manager of the National Tourist Board and team travelled to the Northern Province, Kabala district to be precise, to meet P.C. Gbawuru Mansaray and stakeholders in order to know the status of the Wara-Wara Mountain Modification- EIF Support.

P.C. Gbawuru Mansaray received the technical team at his traditional home and extended his appreciation to the Ministry, the Board, and EIF for following due processes in implementing the project.

He further said that the modification has helped both young and old to access the mountain with ease. P.C. Gbawuru continued to express appreciation and reiterate that this year’s festivals were full of expectations as the hills attracted mass number of tourists from local communities, international JC’s respectively.

The General Manager, while addressing the stakeholders of Kabala, emphasized the need for care and maintenance of structures and trails to keep the attraction in good shape at all times to meet the needs of visitors.

Kabala-“The land of powerful mixtures” has one of the attractive hills overlooking the township. These chains of mountains have a history of warfare that connects the people to their heritage.

Wara-Wara, in the closure of 2022, attracted a huge number of local tourists on VFR and international visitors, which recorded almost 7,000 arrivals/visitors from December 2022 – to early January 2023.

The Youth Chairman, Alhaji Kamara, stated that the number of visitors has grown due to the site modification with nature trails giving access to visitors to reach the top of the mountain with some ease.

He also intimated that visitors can now relax beneath the mountain to experience modern eco-tourism wooden chalets constructed for touristic purposes. The land of Wara Wara Mountains is found in Koinadugu District, immediately northwest of the District Capital of Kabala. The area is characterized by sharp hills reaching up to 1000m in elevation.

The natural vegetation of the area is characterized mostly by woodland savanna. The savanna is dominated by elephant grass.

Wara-Wara Hill is the place to be, the place of diverse cultures. The hills are covered with woodland savanna, short sub-mountain, grassland, and bare rock,  slopes of the hills, and the lowlands have riverine or gallery forests along streams and rivers.