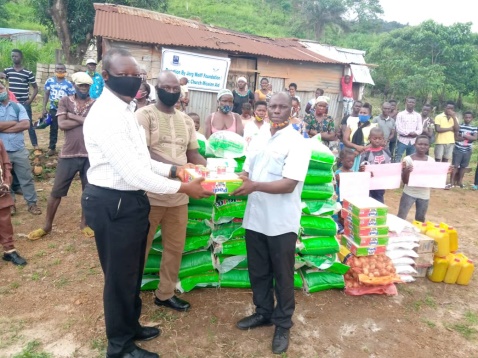 As it is normally said the strong must help the weak meaning that individuals or organizations which are better placed in society must care for the less privileged. It was against this backdrop that the Jorg Wolf Foundation (JWF) through the New Apostolic Church Mission Aid (NACMA) has concluded a nationwide distribution of food items, non-food items and hygiene products to the aged, sick, disabled, disadvantaged people, orphans and street children to the tune of € 10,000 equivalent.

Jorg Wolf is one of the Church Retired District Elders that is giving back to poor people from the profit he is making out of his business in Stuttgart, Germany

This move was  to help alleviate the suffering amongst poor people who can’t afford to fed or fend for themselves during this COVID 19 Pandemic and to also complement  the efforts of the Government to fight against hunger and poverty in remote and hard-to reach- areas in the country.

In the Western Area Rural District at the Forest Compound, No 2 Village   where the donation started, there was a chilling moment of joy when  a 64- year old disable   woman, Yeabu  Turay, fell on the  ground showering praises on the Church for thinking about them during this crisis time when her daily survival depends on street begging.

“I am happy to be one of the beneficiaries,” she exclaimed further explaining that begging, which is her main source of livelihood, is not paying much for her due to the COVID-19 crisis.

With tears filled in her eyes, she said, this was one of the biggest donations I she has   ever received with items that she can cook and also take care of her personal hygiene.

In the Bombali District, at the Binkolo Disable and the Makeni Amputee Camps similar presentations were made to disable persons who were extremely happy to receive such huge donations of food and non -food items which, according to them, will help them with their daily living.

In Kono District, at the Gbendema Disable Camp beneficiaries hailed that the donation came at the right time when they have run out of food stuffs.

In Kailahun District, at the Segbwema Disable Community, the donating team was graciously welcomed for reaching   out to them in the far Eastern part of the country. The beneficiaries danced and sang cultural songs as a sign of appreciation to JW Foundation.

In Kenema District,  at the Kenema School for the Blind, Deaf and Dumb  and also  in Bo District at the Albert Kakua  School for the Deaf similar items of food and non -food items were presented.

In Masiaka town it was not only a donation but also a handing over of a hand- pump dug well costing €3,000 that were presented to the community to ease the stress of residents to walk miles to fetch clean water.

During the official handing over ceremony, the Town Chief, Pa Mansaray, appreciated the JW Foundation for the water well stating that with the construction of the hand –pump dug well such will relieve their children from waking up early in the morning hours to fetch water from streams and rivers.

During the presentation ceremonies nationwide, representatives of  the New Apostle Church,  Joseph Ngegbai and Abubakarr Mansaray noted that the Church is not only limited to preaching the gospel but also helping poor people as Jesus Christ was also feeding the poor and needy.

They said that similar donations were also done in Liberia, Guinea and Ivory Coast.

The donations and handing over ceremonies were witnessed by Apostles and Bishops of the Church and also the Regional Supervisor for Liberia, Guinea and Ivory Coast, Samuel A. Cole.