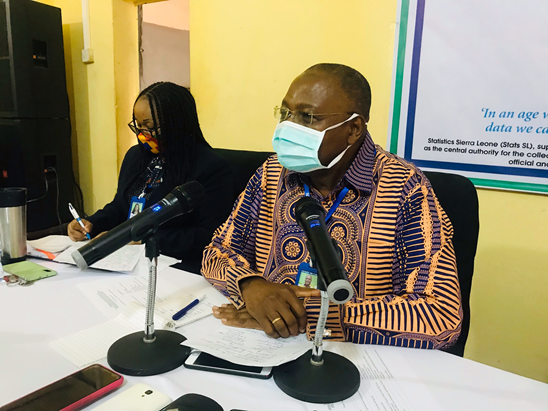 As part of its mandate to coordinate, collect, compile, analyse and disseminate high quality and objective official data that will be used to assist informed decision making in the country, Statistics Sierra Leone with support from Government and partners has revealed that the Mid-Term Population and Housing Census slated to be held on the 4th December, 2020 has been rescheduled to be held on the 19th April, 2021. This disclosure was made during a press conference held on Tuesday 20th October, 2020 at Statistics Sierra Leone Head Office at Tower Hill in Freetown.

Speaking during the briefing, Statistician General & CEO Chief Census Officer, Prof Osman A. Sankoh, said that on 21st July 2020, His Excellency the President Rtd. Brigadier Dr. Julius Maada Bio proclaimed the Mid-Term Population and Housing Census to be conducted by Statistics Sierra Leone (Stats St) with the enumeration to commence on December 4, 2020.

The Statistician General furthered by revealing how Stats SL has been making progress on many fronts in the preparations towards the proclaimed date but, however, due to the ongoing COVID-19 pandemic and its impact on the planned support from external institutions, the following areas of their preparations have been affected: the Movement of high level technical personnel (international consultants) and the procurement of digital materials required for the census.

He on behalf of Stats SL informed that due to the above unavoidable circumstances, Stats SL is constrained to make adjustments to the timelines for critical activities, including the date of commencement of actual enumeration.

The Statistician General assured all that Stats SL remains committed to making the Mid-Term and Housing Census a very inclusive and transparent process so that it can produce credible data and that Stats SL will be updating the public on all developments as they continue to serve the interest of the people of Sierra Leone.

On his part, Deputy Statistician General Stats-SL, Andrew Bob Johnny, commenting on World Statistics Day celebration 2020 for which Sierra Leone yesterday 20th October, 2020 joined the world with the Theme “Connecting the world with Data We Can Trust” said the World Statistics Day coincided with three Global events namely: – The 75th Anniversary of the United Nations, the mid- point in the 2020 World Population & Housing Round of Censuses & the Virtual UN World Data Forum 2020.

Andrew Bob Johnny disclosed that the celebration is a global collaborative endeavor, organized under the guidance of the United Nations Statistical Commission for which he wished to inform all that Stats SL Statistician General and CEO is the current Rapporteur.

He said National Statistics Offices like ours in Sierra Leone will celebrated the day with a theme that emphasizes the importance of Trust Authoritative data Innovation and the public good in national statistical systems.

The  Deputy Statistician General Stats-SL stated that  their Agenda at Stats SL will focus on the theme highlighting the role of Statisticians, Data scientists, Politicians; Experts from the Business sector and Civil Society- in the production of official statistics in achieving the SDGs and in responding to the Global Pandemic.

He said to mark the occasion, they at Stats SL will coordinate activities at National Level and show case how their work has responded to the Data revolution and the demand for innovative solutions to meet the data demands of sustainable development.

Chairman, Stats Council, Moses Williams said that Stats SL was established in 1964 as an institution that was mandated to coordinate, collect, compile, analyse and disseminate high quality and objective official statistics in order to help the country plan properly, ensure equitable distribution of resources and foster economic and social development.

Moses Williams maintained that the role of the media is very key in the popularization of the need for the Mid-Term Population and Housing Census scheduled to be held on the 19th April, 2021. 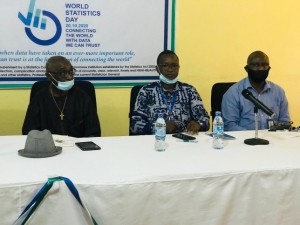 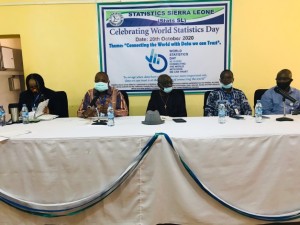