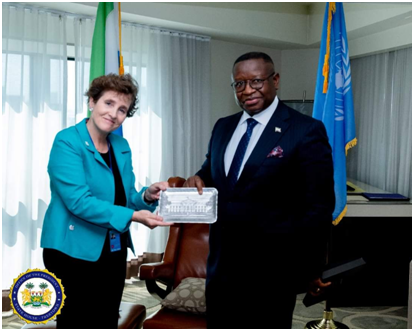 She updated the President on the various stages of the compact development process and commended his leadership for the satisfactory progress made so far.

In response, President Julius Maada Bio expressed his commitment to the development of the compact, adding that the process would be transparent and credible.

He also assured the MCC CEO that his Government would continue to improve on the MCC scorecard despite the challenging circumstances. He highlighted the progress he had made on legislative reforms, investment in human capital development and the protection and empowerment of women and girls.

“We are eagerly waiting for the completion of the compact development process,” President Bio stated.

Earlier this year the MCC, which is an innovative and independent U.S. foreign assistance agency that is helping lead the fight against global poverty, notified the Government of Sierra Leone of its plans to finance critical feasibility studies to further develop and design the proposed Sierra Leone compact in four areas of opportunity, including assessing the expected impact of the proposed compact, furthering design activities, and developing implementation strategies.