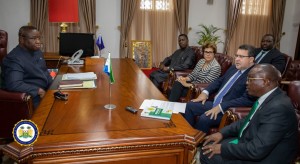 Presenting the new World Bank Chief, Finance Minister Jacob Jusu Saffa said that Mr. Laporte has served in various positions at the international level. He said the World Bank boss is in State House to discuss a wide range of issues relating to the development of Sierra Leone.

In his presentation, Mr. Laporte said he is pleased to meet with the President and assured that he would use his experience and expertise to bring the right support to the Government of Sierra Leone.

Before joining the Bank, Laporte, a Seychelles national, was the Minister for Finance, Trade, and Investment of the Republic of Seychelles and he served as Governor of the Central Bank of Seychelles. During that time, Laporte was a leading member of the Seychelles Government team that implemented the country’s successful macro-economic reform program that was launched in 2008 with international support.

Prior to joining the World Bank, Laporte was a regular speaker for the Bank and the International Monetary Fund (IMF) on experiences on debt and growth challenges facing island economies.

Laporte previously served as an economist with the IMF, as well as the Resident Representative in Niger from 2005-2008. Laporte has private sector experience having served as the CEO of the Sacos Insurance Group in Seychelles. His professional accomplishments also include leading Seychelles’ accession into the World Trade Organization as Trade Minister.

Mr. Laporte holds a Master’s degree in Economics (with Distinction) from the University of Sheffield (UK) and a Bachelor’s degree in Business Economics with Computing from the University of Surrey (UK). He is also a holder of several awards; in 1998 he received the Midland Bank Award for Outstanding Performer in the Economics, Money, Banking and Finance programs of the University of Sheffield (1998). He received the 2013 Southern African Finance Minister of the Year award by the African Leadership Magazine and a Special Commendation Award for Outstanding Contribution and Service to Humanity by the Georgia Legislative Black Caucus in 2014.

He said he arrives in Sierra Leone at a time when the country is making progress. He reaffirmed his support, adding that he would work together with the Government to find solutions to the many challenges facing the country.

In his response, President Bio said: “Let me welcome you to Sierra Leone and to let you know that you have good partners in development. We want to get on with the process of development and we will work with you so that we can surmount the challenges”.

So what are these challenges?

This is the latest World Bank’s overview of the situation in Sierra Leone:

Sierra Leone’s economy grew by 7.8% on average during 2003-2014 but contracted by 21% in 2015 following the Ebola outbreak and a decline in the price of iron ore, the main export product. Although the country was declared Ebola free in March 2016, the economic recovery has been volatile.

Growth rebounded to 6.4% in 2016 only to decelerate to 3.8% in 2017 and remaining roughly stagnant at 3.7% in 2018. Adding to the challenge of recovery, a large landslide hit Freetown in August 2017, further disrupting economic activity and slowing the pace of the recovery.

The current growth patterns have slightly reversed the gains in poverty reduction: per capita income, estimated at US$506 in 2018, remains below its pre-Ebola level ($660) compounded by a population growth of about 2%.

The 2018 Sierra Leone Integrated Household Survey provisionally puts the overall poverty headcount at 56.7% compared to 53.8 in 2011. The poverty rate remains higher in rural areas (72.2%) than urban towns (18.4% in Freetown).

Broad macroeconomic stability is yet to be assured. Inflationary pressure has persisted due to the depreciation of the exchange rate, food supply constraints early in 2018 and the adverse impact of the liberalization of fuel prices in July 2018.

The Bank of Sierra Leone increased the policy rate (MPR) by 200 basis points to 16.5% in December 2018 in a bid to reduce the high inflation.

The Leone depreciated by 12.0% year-on-year, underpinned by the widening of the current account deficit to 14.0% of GDP (from 11.7% in 2017), following the sharp drop in exports earnings.

Total domestic revenue increased to 17.2% of GDP in 2018 (from 14.9% in the previous year) due mainly to elimination of fuel subsidies, reduction of excessive duty and tax waivers and introduction of a treasury single account (TSA).

Total public debt reached 66.3% of GDP in 2018 (from 64.6% of GDP a year earlier), reflecting depreciation of the exchange rate as well as the increase in domestic debt.

The recent World Bank and IMF Debt Sustainability Analysis assessed the country to be at a “high risk” of debt distress for both external public debt and overall public debt.

Growth is expected to improve to 5.4% in 2019 and stabilize at 5.2% by 2021, largely reflecting the recovery in mining sector but also improvements in agriculture and services.

Sierra Leone held general elections on March 7, 2018 to elect a new president, members of Parliament and local councils in the fourth cycle of elections since the civil war in 2002. Opposition Sierra Leone People’s Party (SLPP) candidate, Rtd. Brig. Julius Maada Bio won in a run-off after the first round failed to produce an outright winner.

The losing All People’s Congress (APC) won majority in Parliament with 68 seats to the SLPP’s 49. Two new parties – the Coalition for Change (C4C) and the National Grand Coalition (NGC) – won eight and four seats respectively. Three independent candidates were elected. This is the first time a winning party has failed to have majority in Parliament.

The new administration on January 29, 2019 launched three Commissions of Inquiry (COIs) to probe into the governance activities of the past administration covering 2007 to 2018. Persons of Interest include former president, vice presidents, ministers, deputies, and other civil and public servants.

The judge-led Commissions are expected to hold proceedings for six months though there is provision for an extension should the need arise.

The main opposition party filed a case in the Supreme Court seeking clarifications on some constitutional provisions, which they allege had been breached by the government in setting up the Commissions.

The Sierra Leone Parliament on February 22, 2019 ratified a State of Public Emergency proclamation made by the President on rape and other forms of sexual violence against women and girls, but the main opposition insists the debate was inconclusive and that “a Public State of Emergency does not exist.”

Political tension between the ruling party and the opposition came to a head following a local council by-election in the Kambia District, which was won by the ruling party candidate. The two opposition parties (APC and NCG), which contested in the election, rejected the results.

Until the outbreak of Ebola in May 2014, Sierra Leone was seeking to attain middle-income status by 2035, but the country still carries its post-conflict attributes of high youth unemployment, corruption and weak governance.

The country continues to face the daunting challenge of enhancing transparency in managing its natural resources and creating fiscal space for development. Problems of poor infrastructure and widespread rural and urban impoverishment persist despite remarkable strides and reforms.