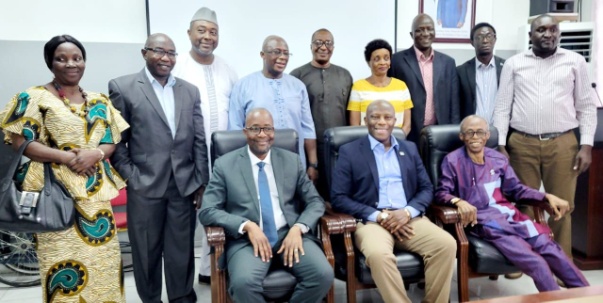 Dr. Victor Massaquoi, the newly appointed Chairman of the Independent Media Commission (IMC) and other new commissioners on the 6th April 2022  met with the Minister of Information and Communications, Mohamed Rahman Swaray, at his Youyi Building Office.

Speaking to the Minister after he was introduced by the Director of Information Emmanuel AB Turay, Dr. Victor Massaquoi thanked the Minister for giving them audience.

Dr. Massaquoi continued to say that he is determined to bring changes and reforms that would transform the commission into a more structured and effective institution, promising to improve on the work left by his predecessor. He also spoke about the present condition of the Commission’s office, citing issues of limited parking space and a noisy environment, which he said is making work difficult for the commissioners. He revealed that he is now working on plans to move to a new office.

In his response, the Minister said that he is pleased to formerly meet the new Chairman and other Commissioners of the commission for the first time after their appointments, saying that the Government of President Julius Maada Bio is always committed to ensuring that the media is promoted with all seriousness.

He disclosed that, in the coming weeks, there would be a media investment conference, geared towards looking at the challenges and opportunities in the media sector and wished them all the best in their work.